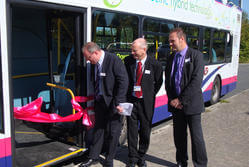 A hybrid electric double-decker bus is now up and running on the streets of Bath, as part of the CIVITAS RENAISSANCE Initiative in the city. The bus was unveiled to the media and stakeholders at an event on 31 August and went into service on the city’s Park and Ride routes later that day.

The launch was attended by CIVITAS partners, including representatives of Bath & North East Somerset Council, local television and print media, and others including the city’s Member of Parliament. Those attending were able to ride the bus from the Odd Down Park and Ride into the city centre and back. The bus was able to run entirely on electric power, emission-free, for its journey through the city centre, passing almost silently through the bustling streets and drawing much attention from the passing public. The bus will be tested for six months on the city’s three Park & Ride routes, as part of normal services. During this time, the bus company First’s engineers will monitor and assess performance, fuel consumption and emissions in comparison with conventional diesel engine buses. Researchers from the University of the West of England will conduct regular interviews with passengers to gather their views on the vehicle.The launch event was featured on local television station ITV West, and on BBC Radio Bristol, which conducted a live interview with First about the measure.