Green waves on the CIVITAS Corridor in Monza 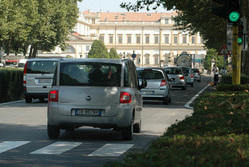 In order to reduce traffic congestion, the city of Monza is carrying out the optimisation of traffic light programming through the experimentation of a Urban Traffic Control System (UTC) on an important city corridor, namely the “CIVITAS Corridor”.

Simulations have been done in a virtual environment in order to design the traffic light programming of six intersections. The intersections are located near to each other according to real situations with relevant green waves for those cars running along the corridor at the average speed of 40km/h.Since the end of May 2010, Project Automation, partner of ARCHIMEDES Project in Monza for this measure, started the test of green waves on the CIVITAS Corridor. So far everything seems to be working properly, now it is just a matter of refining the best the timing of green lights. Hopefully, when this his measure will be fully implemented and every intersection of the Corridor will be put under the control of the UTC system, due for the end of this summer, this technical innovation will provide great benefits to Monza’s citizens and not only.