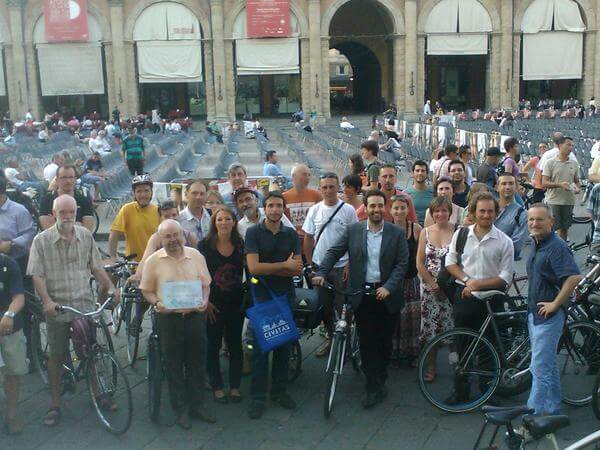 In May 2012, seven cities challenged each other in the European Cycling Challenge 2012. The goal for each city was to cover the most kilometres by bike with the help from local participants.

Tallinn has won the European Cycling Challenge in May 2012. However, looking at the results achieved, all seven cites triumphed! Over 1,100 citizens took part in swapping the car for the bike for four weeks - resulting in 90,000 kms and a saving of 20 tonnes of CO2-emissions. These achievements are in line with targets set out by the European Commission. With the European Cycling Challenge, city councils have not only found a successful low-cost citizen engagement tool to encourage cycling, they have also achieved a modal shift in commuter cycling and a new database of cyclist commuters and their routes. The good news is that the challenge is set to continue. Does your city want to join?  Originally started as a MIMOSA measure in Bologna in 2011, the month-long European Cycling Challenge managed by local transport authority SRM, now covers Barcelona (Spain), Iasi (Romania), Reading (United Kingdom), San Lazzaro di Savena (Italy), Elliniko-Argyroupoli (Greece), Kessariani (Greece) and Saronikos (Greece).  At the end of the challenge, Tallinn and Bologna, both MIMOSA project partner cities, respectively ranked first and second, followed by Barcelona. Tallinn's win is quite remarkable, given the city's historically low modal share of cycling over the past ten years in comparison to the other participating cities. The competition is cleverly designed as an incentivised tool for cyclists to do their very best and build up a daily habit. The distance of every bike trip was traced via GPS through cyclists’ mobile phones plus a web platform, which allows for real-time data and conversation sharing, as well as a Facebook page. The municipal administration of Bologna now has a detailed mapping system that shows the most popular itineraries, distances travelled, as well as a database of commuter cyclists they can engage with further. Most importantly, the city council has proved that cycling could be a widespread and enjoyable experience. Considering that more than 50 percent of all movements in Bologna are shorter than 5 km, the challenge made clear that people can use cycling as a viable daily transport option as opposed to car and only using the bike for leisure. The initiative also showed that even just cycling one day a week, reduces one's carbon footprint by 20 percent. This corresponds with the goals set by the European Commission. The MIMOSA measure has been so successful that Bologna seeks to build on it at a local and European level. In June, the local winners of the May challenge will be awarded their prizes by the Vice Mayor for urban mobility, Mr. Andrea Colombo. Bologna is also set to continue with the European Cycling Challenge. If your city is interested in taking part in this affordable citizen engagement tool, contact dora [dot] ramazzotti [at] srmbologna [dot] it for further information.