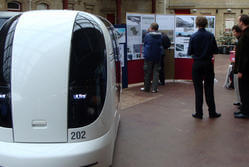 A public exhibition on CIVITAS RENAISSANCE measures was held in Bath on November 12 and 13.

Exhibition panels with a selection of the fifteen designs submitted from around the world to the ATS ULTra design competition were displayed at Bath’s Green Park Station. A display by Bath & North East Somerset Council highlighted the full range of RENAISSANCE measures being undertaken in the city. In addition to the competition entries, an ULTra vehicle was set up at the station for members of public to view. ULTra is a Personal Rapid Transit (PRT) system, a new form of urban transportation using small, silent, electric vehicles driven by computers through a dedicated network of guideways. The competition asked designers from around the world to submitted their visions of how ULTra could be customised to be more suitable for a heritage city. A great deal of interest in the exhibition was shown by members of the public. The Bath Chronicle, the city’s weekly newspaper, attended the event, having run a story on the exhibition in the preceding week.