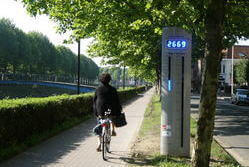 From July 2011 Ghent will count its cyclists via a cycle counting barometer. The barometer is a 3m high pole that gives real time information on the amount of cyclists that have passed that day. Not only is the daily total mentioned, but the blue LED-lamps also depict the cumulative total of the current year and the total of the previous year.

The number of cyclists in Ghent has grown rapidly in recent years. Even though the city organises manual counting, there is still a need for reliable statistics over longer periods. The cyclist barometer will produce the necessary data with which the city of Ghent can evaluate its mobility policy. Furthermore, with this new registration system, the city gives cyclist the signal that they are important and that they contribute to making Ghent more liveable. The promotion slogan is easy to spot: Every cyclist counts!   Ghent is the first city in Belgium that installs cyclist barometers, but in other European cities, like Aalborg, Odense, Kopenhagen, Stockholm, Malmö and Apeldoorn, they are already common property. Each night at 12.00 the timer is reset and the day counting starts all over.