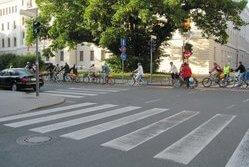 European Mobility Week in Ljubljana was a vibrant colourful affair and many events, related to transport, mobility, environment and health were organised When the CIVITAS ELAN team was actively present (you can read about it in separate news articles), several interesting round tables, presentations and workshops took place, aside from the CIVITAS Day and the In Town Without My Car Day.

CIVITAS ELAN coordinator Zdenka Šimonovič participated in a round table titled “Suburban transport: a key to unburdening the city”. The speakers debated how to organise suburban public transport in larger cities and how to connect it with other forms of sustainable transport. More than 140.000 passengers arrive daily in Ljubljana by car and the main reasons for the increase of car usage is people’s mindset, a belief that a car assures personal freedom and time efficiency. But according to speakers, this belief is often false, and they will try to change it. Partly by implementing CIVITAS ELAN measures. While presenting our project, Ms. Šimonovič commented, that in the first place, better conditions for public transportation, cycling and alternative transport modes must be established in order to convince citizens to use them. “The sad thing is that people change their values only if they are forced to do so or if they are well aware of the consequences. This is why raising awareness is so important,” she highlighted and emphasized the most valuable thing in the project: that it brought together different partners, all experts in their own fields, who can make a difference. The next day, the City cycling platform was presented to the public. The measure leader, who moderated the workshop about cycling, said that at first we have to improve the current state, otherwise new improvements would not be able stabilize. Beside the construction of better cycling infrastructure, promotion and increase of cycling traffic for 20 % and the improvement of the safety of cyclists and bicycles, the cycling culture and perception that other traffic participants have about cyclists needs to be changed. CINDI Slovenia also introduced the project Life Cycle. Its aim is to integrate cycling as the natural mean of transport in daily life and wants to change the increasingly sedentary lifestyles of people by adding physical activity to their daily routines. After the workshop, participants joined the deputy major of City of Ljubljana Aleš Čerin on a cycle ride through the city center.On Friday, the minister of transport, Patrick Vlačič, and minister of environment and spatial planning, Karl Erjavec, visited City Hall where The Regional Development Agency of the Ljubljana Urban region presented a study titled “Expert basis for public transport in the region”. Mr. Vlačič pointed out that sustainable mobility is at the center of the government’s transport policy, however, the culture of car use is still very strong among citizens. He agreed that some adjustments regarding public transport have to be made, but “once we establish a system that is user-friendly, we are sure that people will gladly use it.” Mr. Erjavec said that EMW reminds us to think about the environment. “When we are stuck in a traffic jam, the real problem is not that we are a little late. The problem is how much greenhouse gas emissions we produce,” he stressed and prompted, that events like EMW should be used to promote public transport, cycling and other forms of transport. Well, we will need more time than one week, but we believe we are on a good way to reaching this goal.