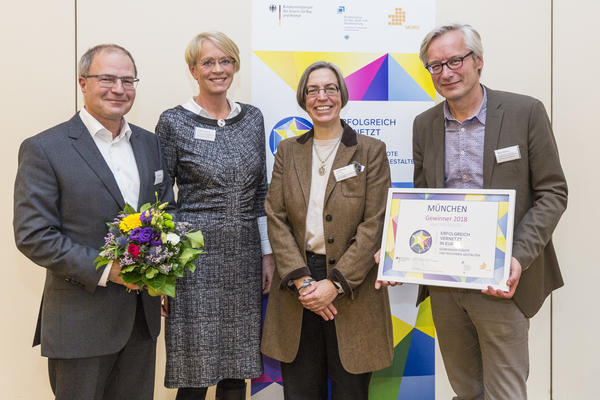 In the competition "Successfully connected in Europe - shaping cities and regions together", one of four prizes went to CIVITAS ECCENTRIC city Munich.

The German Federal Institute for Research on Building, Urban Affairs and Spatial Development (BMI) has honoured the work of  Munich (Germany) as being exemplary. Munich is one of the five project cities in CIVITAS ECCENTRIC.

It also praised how it successfully contributes to strengthening co-operation across community boundaries and supporting balanced urban and regional development.

Munich, the state capital of Bavaria, was awarded the prize in the category for cities with over 500,000 inhabitants. In addition to the diversity of projects and partner countries, the jury was convinced by the communicable approaches, which explore the potential for economic development as well as for improving the quality of life of all citizens.

The Munich approaches were well transferable to fast-growing cities, said the jury. These include, for example, sustainable mobility solutions to better integrate peripheral areas, as well as the protection and further development of city-regional green spaces.

The approaches are being developed and implemented in Munich in five projects, one of which is CIVITAS ECCENTRIC.

The award recognizes German cities and regions that are particularly intensively connected in Europe and can thus gain advantages for their own regional development.

"The winners of our competition exemplify how cross-border cooperation can advance the development of cities and regions, and at the same time strengthen their sense of community and their identification with Europe," says Marco Wanderwitz , Parliamentary State Secretary at the Federal Ministry of the Interior.