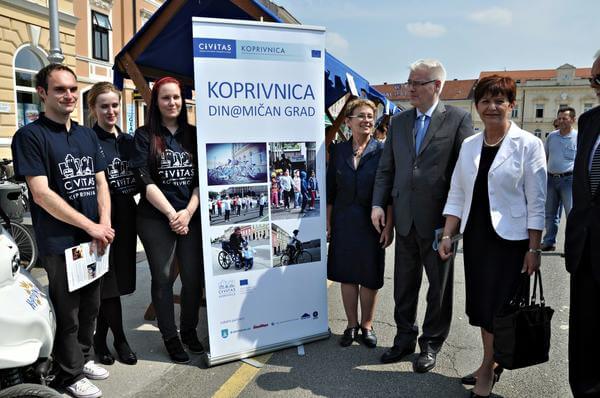 The central event of Earth Day 2013 in Koprivnica was the presentation of sustainable projects of businesses, kindergartens, schools,civil society organizations and local agencies. The event included the first public presentation of CIVITAS  Dyn@mo, which was presented by the City of Koprivnica together with other projects currently implemented in the city. The presentation was very well received by the citizens who asked for additional information.One of the interested visitors was Dr Ivo Josipovic, President of Croatia who was attending the celebration of 20th anniversary of local government of the City. President Josipovic  expressed his interest in the measures of electromobility and sustainable mobility planning, stating that Koprivnica has already achieved the quality of life of a European city, but will undoubtedly continue to grow and thrive in EU, which Croatia will soon join. Other distinguished visitors were: Mr Istvan Toth, deputy mayor of Kaposvar, Koprivnica's Hungarian twin-city, Mr Gordan Filipovic, deputy chairman of Croatian local self-government in the city of Kaposvar, Mr Zvonimir Mrsic, CEO of Podravka food industry, Mr Drazen Pros, deputy Minister of Entrepreneurship, Mr Darko Ledinski, assistant of the Minister of Social affairs and Mrs Ankica Njezic, assistant of the Minister of Science, Eductation and sports.

The DYN@MO Summer University is a competence building event organized by the Universitat de...