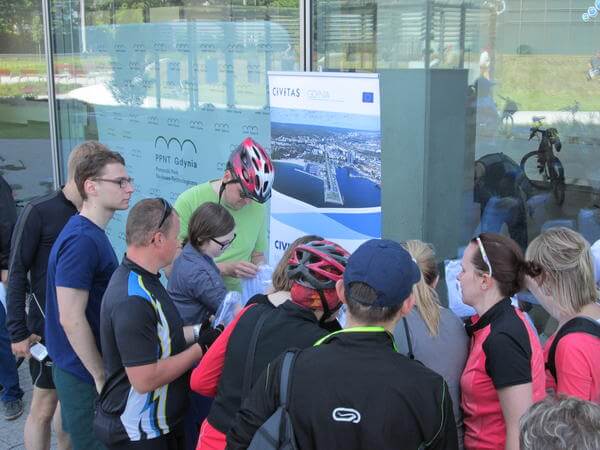 Within CIVITAS DYN@MO measure Community project studies from SUMP, City of Gdynia conducted a promotional campaign for walking, cycling and pedestrian areas. The campaign was divided into two competitions based on GPS technology. Both campaigns encouraged inhabitants of different ages to cycle or walk to schools, workplaces and shopping centres using GPS devices and applications to track their daily journeys.

In May 2014, Gdynia participated in the European Cycling Challenge 2014 (ECC). The city competed with 31 European towns and cities for cycled kilometres registered on Endomondo application. The preparations for this event started in early March when a meeting with cycling interest groups was organised to get support for the promotion of the campaign.

To inform about Gdynia’s participation in ECC and encourage the participation of a wider group of people, Gdynia set up promotional stands during regional Cycling Festival and Pomeranian Citizens Congress, as well as produced posters and leaflets, which were distributed during different local events, to different companies in Gdynia and with home delivered pizzas (thanks to a co-operation with one of Gdynia’s pizza restaurants). An ECC info-point was set up in Gdynia’s Infobox. During the promotional events and in the info-points, people received help in creating accounts for Endomondo and got tips how to use the application on different devices. A week before the launch of the competition a press conference was organised in the Gdynia City Hall.

The ECC started with about 700 cyclists in the city’s team from Gdynia and the neighbouring cities. During the competition, members of the team used Endomondo for communication and created an online community around the ongoing competition. The team members discussed a lot about their experiences and the best routes to take. During the final event, which was organised at the end of the ECC, the online community had a chance to meet for the first time face to face.

During the final event of ECC, City of Gdynia organised a family picnic and a ride through Gdynia’s streets. The event was organised in co-operation with local cycling NGO “Rowerowa Gdynia” and other municipal and private company partners. During the event, a lottery took place with several prizes like restaurant vouchers, entrance tickets to a trampoline park, CIVITAS DYN@MO promotional materials and other gifts from sponsors. Everybody had a chance to learn Irish dance with dancers from a dance school. A DYN@MO info-point was opened and opinions about the SUMP vision for the city were collected.

The final results of Gdynia were remarkable. The city ranked 5th in the competition with about 80000 kilometres covered! The amount equals circling the Earth two times in one month! Based on the participants’ GPS data, Gdynia can create a map, which shows the most popular streets and routes. This helps to create a coherent bicycle route network.

The other part of the Gdynia campaign was addressed to school pupils. 10 classes from Gdynia’s primary schools were invited to participate in a competition called “Wyścig przez Polskę”. It was based on GPS tracking as well. Each group of students got a GPS device to register their journeys on their way to/from school and during other activities. All trips made by bike, scooter, skateboard or foot were accepted. Data from the devices was transferred to a dedicated website, which was established as a part of the Mobility 2.0 platform Mobilna Gdynia (www.mobilnagdynia.pl) created within the DYN@MO project. On “Wyścig przez Polskę” website, children could see the progress on a virtual map of Poland, which showed the kilometres covered.  On this map, a special route developed according to the kilometres covered through the biggest and the most famous Polish cities. In every city, pupils received special tasks on the topics of public space, pedestrian areas and sustainable transport. At the end of the competition, the three best classes were awarded with prizes such as theatre or cinema tickets and a visit to the PKT depot – the Gdynia trolleybus company – local DYN@MO consortium partner.

Both competitions were a great success and the new technologies used to run the campaigns contributed much to the results achieved and provided relevant data for mobility planning and implementing the DYN@MO measures. 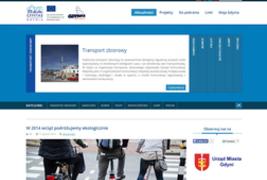 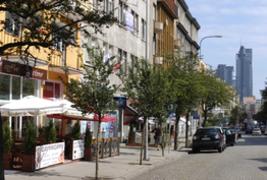