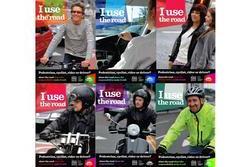 A road safety publicity campaign starring city residents is being launched in London Road and Lewes Road in Brighton this week.Posters at bus shelters will go up in London Road from today, Monday 8 November. They feature Brighton & Hove residents as they walk, cycle, ride or drive in the city, giving a real representation of transport use.

The campaign is aimed at helping to help prevent collisions in two of the city’s busiest roads, with the message for all road users to ‘look out for others‘ and to ‘share the road, share the responsibility, make it safe.’London Road and Lewes Road corridors have a high volume of shoppers and road users. A radio advert will be aired across the region during November to remind people to look out for others when crossing or driving on the road. The campaign is a response to research by the Sussex Safer Roads Partnership (SSRP) which identified groups and locations most at risk of road safety collisions in the city. It showed that young pedestrians, cyclists and moped riders were particularly vulnerable, as well as motorcyclists of all ages.Brighton & Hove’s cabinet member for the environment, councillor Geoffrey Theobald, said: “Residents appear in the campaign posters going about their daily journeys. By raising awareness of different road users we aim to change the attitudes and behaviours that cause collisions and encourage good road safety habits, so everyone is safe.”The council is also delivering minor measures that will provide a safer and more attractive area for all, with the focus on improving visibility at junctions.CIVITAS has part-funded the project. The city council was the only one in the country to win £2.2 million to invest in small-scale transport projects from the CIVITAS Plus ARCHIMEDES Project and is working with five other European cities to share best practice.