Celebration of CIVITAS ARCHIMEDES in Aalborg 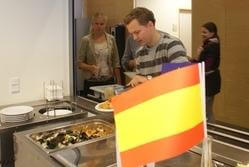 On 15 September, the Technical and Environmental Department of Aalborg celebrated CIVITAS ARCHIMEDES’ two year birthday in the canteen of the department. To mark the anniversary the canteen served food from the five countries involved in the project: Romania, Spain, United Kingdom, Italy and the Czech Republic.

The canteen was also decorated with flags from the five countries and the European Union, posters describing the project and the City of Aalborg’s involvement, a collage with newspaper headings and pictures from the first two years of the project. Also a roll-up poster, initially created for the ICLEI Conference in Dunkerque was re-used in order to give even more information about the project to the employees of the Department. A local leaflet about was also updated and distributed in the canteen.The purpose of all this was of course to create more visibility of the measures that are being implemented in the City of Aalborg and ARCHIMEDES as a whole. The intranet of the department was also used to promote the different measures during the week, telling the story of ARCHIMEDES in two years in Aalborg. This helped to promote the project, informing colleagues who were not aware of it, and also to creating a positive feeling about CIVITAS, by combining it with nice food from partner cities.