Car-pooling pilot takes off in Brescia 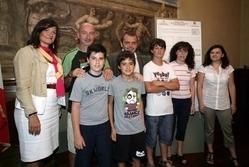 A car-pooling pilot-project has been launched in Brescia, in collaboration with "Tridentina" school. Brescia Municipality equipped three cars with GPS systems and distance/people on-board calculators, to evaluate the real cost savings. The cars dropped children to school from November 2010 to June 2011.

The first car (one adult and four kids on board) did a total 133 trips, instead of 486 without car-pooling. The car was driven for a total of 358 kilometers instead of 1245 and emitted 73 Kg CO2 instead of 254. The second crew saved 480 trips, 1258 Km and 149 Kg of CO2, while the third crew 511 trips, 1423 Km and 196 Kg. "We believe it is important to take care of our environment and trips mode: that is why we launched the pilot-project in a school" said Deputy Mayor Mr. Fabio Rolfi. "No doubts, car pooling is a difficult experience: everybody like to ride his own car. We have to work on culture, starting from young people." Several companies interested in car pooling options and are currently contacting the Municipality of Brescia to evaluate possible collaborations.