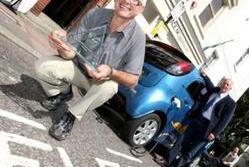 Brighton & Hove City Council has won a national award for its work to promote the use of electric vehicles. It is the only city in the country to have gained funding for such a project from the CIVITAS ARCHIMEDES Project.