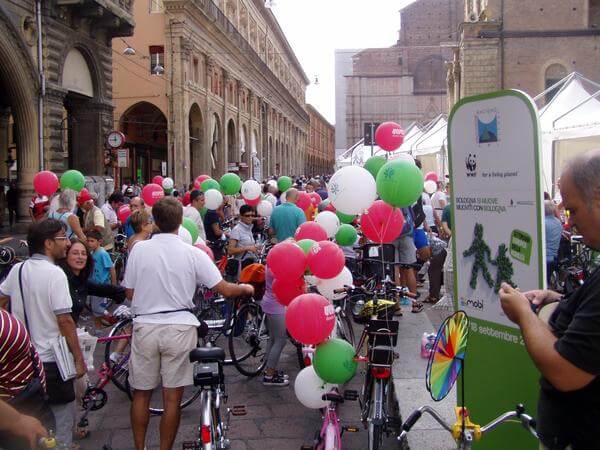 CIVITAS MIMOSA city Bologna has won the 2011 European Mobility Week Award on its tenth anniversary. The runners-up were Larnaka in Cyprus and CIVITAS ELAN city Zagreb.

Bologna was judged by an independent panel of mobility experts to have done the best job in promoting clean alternatives to using cars and involving citizens in activities to support sustainable urban mobility during European Mobility Week 2011. The award was handed to the winning city by Environment Commissioner Janez Potočnik and Vice-President Siim Kallas European Commissioner for Transport at a ceremony in the Brussels Musical Instrument Museum on 5 March 2012. Vice-President Siim Kallas, responsible for Transport, said: "While responding to the challenge to make our cities cleaner and safer, the 2011 Transport White Paper highlights the need for a new approach to urban mobility. The winning cities have a lot to offer in this respect. By sharing experience on alternative mobility, European cities can implement more attractive and reliable options, thus making a positive impact on our quality of life." Environment Commissioner Janez Potočnik said: "With cities and their citizens increasingly suffering from congestion and pollution, there has never been a better time to switch from private cars to other means of transport. Bologna, Larnaka and Zagreb have found creative ways to permanently make their transport infrastructure more sustainable. I hope they will inspire other cities to do the same." The 2011 campaign theme – “Alternative Mobility” – set out to support the transition towards a resource-efficient transport system by promoting clean, fuel-efficient or human-powered modes of transport. Bologna won over the European Mobility Week jury by organising a Car Free weekend instead of just one day. The permanent measures implemented included building charging points for electric cars and a plan to extend the city's network of cycling paths to 130 km. The municipal authorities invited citizens to contribute their views to the plan during Mobility Week. Bologna also set up a large car-free zone at the heart of the city for the week. This pedestrian area was open to street performers, retailers and sports associations and as the initiative attracted over 60 000 visitors, the city authorities have decided to repeat it in future events. The city also organised numerous bike tours, bicycle workshops and self-repair stands, games, walks and an exhibition on electric cars. Police officers participated in information sessions giving tips and explanations on safe cycling to families and an information point was set up for citizens to learn about new services offered to cyclists.