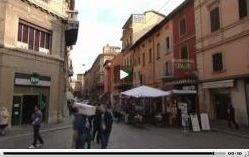 An informative new video highlights the progress the Italian city of Bologna has made in terms of reducing traffic in the city centre, through access restrictions but also public transport improvements and bike- and car-sharing schemes.

Bologna’s efforts have resulted in a 25 percent reduction in traffic in the city centre, and its citizens are already enjoying calmer, safer streets. This short video, available here, highlights the work Bologna has been doing as part of its push towards sustainable mobility.The traffic jam-prone city restricts access to the city centre using an automatic camera system to scan license plates in order to prevent unregistered vehicles from entering the centre. This system is supported by measures encouraging the uptake of public transport, as well as bike- and car-sharing which enables citizens to remain mobile in a sustainable way.Bologna’s access restrictions and promotion of shared transport are part of Bologna’s overall goal to convince its citizens to make the switch from private cars to more sustainable modes of transport such as shared and public vehicles.