Bologna is Cycling towards Kyoto 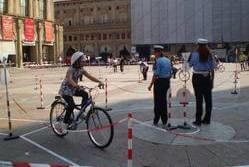 From 18-19 September, the citizens of Bologna were involved in a Roadshow organised by Municipality of Bologna to disseminate the CIVITAS MIMOSA project, together with European Mobility Week 2009.

Several initiatives and events took place across the city with the purpose of promoting sustainable mobility and presenting provisions and plans that are in the pipeline. Under the title “Cycling towards Kyoto”, a two-day key event, highlighted the use of bicycles as a sustainable means of transport, combining environmentally friendly traveling with a healthy lifestyle. Many volunteers cycled the symbolic route to Kyoto, a journey that allowed them to discover best practices of sustainability from other countries. During the entire week, a “Cycle Office” was available for free bike check-ups and the application of the “registration mark” against theft. There was also an event for children that taught them about road rules and bicycle safety. The children cycled around a purposely laid out track that was constructed to mimic typical road scenarios. As they cycled there were people to explain the different road signs, road markings, road layouts and how to obey them. The track was painted on the main square in the city (Piazza Maggiore), and each child received a MIMOSA glowing safety strip and a ‘symbolic’ license to say they had completed the course as rewards for their efforts.The campaign saw the participation of about 3,000 people and all the events were covered by the local media. About 2,600 brochures on sustainable mobility practices, 900 brochures on MIMOSA Project, 100 “Move” brochures on CIVITAS initiative and other informative leaflets were distributed in hard copies. 150 people attended the MIMOSA project official presentation conference, 350 answers to a specific survey were collected, 500 people participated in bicycle auctions (100 bicycles were assigned at low cost), 100 children participated in open air cycling lessons, 1.000 MIMOSA gadgets for road safety were distributed.