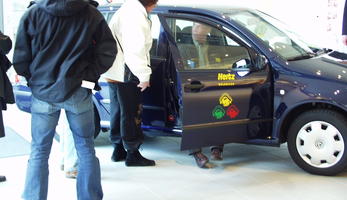 Private cars are indispensible for many people as a flexible mode of transport. Aalborg wants to encourage employees in private companies to make more efficient use of vehicles and minimise the environmental impact of car traffic by either using car sharing or car pooling.

The aim of this measure was to increase the use of the existing car sharing scheme through a strategy focused on the companies’ and employees’ travels. After a first in depth analysis, and the deceiving effects of a first marketing campaign, the focus was changed to youth mobility needs and to the offer of cars located near groups of young people.  This change in target led to changes in the implementation of the measure and also in the evaluation methodology, skipping some initial indicators.

During the project, 3 campaigns have been implemented towards the target group of young people, mainly students, with an expected low demand for car use.

The first campaign was a broad campaign using traditional media as the electronic monitors in all buses and the big city posters in the bus shelters. The purpose of the campaign was to draw attention to the possibilities in car sharing scheme.

The second campaign was a minor newspaper based campaign informing of the new possibilities after relocating the car sharing locations. For the third campaign the sub-segment of computer geeks was selected, to test a new form of campaign, where the content was a competition requiring skills and an effort to participate. The competition was so hard that only a small number of the participants were supposed to find the solution – giving them a significant possibility to win one of the prizes. The purpose was that a great number of participants should spend a lot of time, trying to solve the puzzle, and thus be very much aware of car sharing. And that the puzzle should be so difficult that the target group would start sending it to each other – creating a viral marketing effect.

The campaign used a wide range of new media as the internet, a viral mail campaign and QR Codes.

The use of car sharing has been decreasing during the project period. Any positive effect of the campaigns and changes in localisation of cars has not able to counteract this trend. In spite of running three campaigns and a significant increase of respectively 43% and 29 % in numbers of locations and numbers of cars, the evaluation showed a significant decrease of 7% per year in the number of car rentals, 9% per year in kilometres performed in total and 15% per year in kilometres performed by cars. At the same time the numbers of active users went down with 7% per year.'

The overall conclusion based on analyse of potential drivers and barriers, is, that the prerequisite for running a healthy car sharing system does not exist in the Aalborg framework at the moment. The main lacking driver is the absence of a financial motivation for using car sharing.

The initial objective for this measures was to encourage companies in the ARCHIMEDES corridor to use an already existing car sharing scheme in the city instead of own company cars. This would also give opportunities for their employees to use the scheme at a special rate. An initial in-depth going analyse showed that there was no real drivers for the companies to use car sharing in the local framework. Still leaflets were produced and a campaign was conducted targeting a selection of most probable companies. As the double approach to 25 companies (paper mails and telephone follow up) was not successful, the measure was redefined to campaigns aiming at young people, mainly students, as a more likely target group for car sharing. 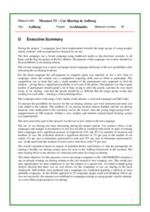 In December 2011, the City of Aalborg and Hertz Car Sharing are demonstrating the use of QR codes. Try it yourself! Scan the QR code and read the full story.