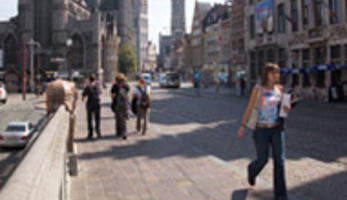 To encourage citizens to view walking as a viable and sustainable mode of transport, Ghent will combine existing and new promotion campaigns and carry out minor infrastructural work.

Ghent is encouraging its inhabitants to get walking by running a campaign based on the 1,000 steps a day objective. Inhabitants can buy a pedometer for € 20 Euro to count the steps they take each day. The campaign is focusing on the health of citizens. The entire CIVITAS ELAN corridor will receive special attention concerning safe and comfortable pedestrian crossings and paths.

The plan was to liase with  the city's Pavement Action Plan. This is a list of small works to improve poor pavements.
On the promotion side, a marketing campaign with a photo competiton was launched. And finally, Gent developed a walking map, where the distance is provided in average walking time, and not in kilometers. Gent distributed 20.000 walking maps. 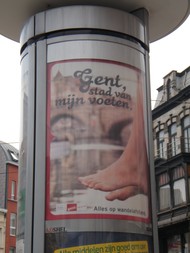 This measure aimed at supporting walking as a sustainable transport mode through the combination of existing and new promotion campaigns and small infrastructure works. This measure thus includes two aspects: (i) one aspect is to stimulate walking through promotion campaigns and the distribution of a walking map, and (ii) another aspect is an analysis of the current state of the roadwork with a focus on pedestrians. Based on this analysis actions were undertaken in the CIVITAS ELAN-corridor. Small infrastructure works have thus been implemented that increase the safety and comfort of the corridor for pedestrians.
There was a deviation from the original plan. Supplementary, a functional walking map was also developed to stimulate walking in Ghent.

Key result
Citizens are more familiar with the walking promotion campaign as well as with the functional waking map than students
Citizens (12,5%) are more familiar with the walking promotion campaign and the functional walking map than students in higher education (10,7%). Objectives of at least 25% familiarity are thus only partially achieved. The lower familiarity rates among students in higher education might be explained by the lower promotion effort towards this target group. Although Ghent is an important student city, promotion towards students is sometimes low mainly because this must be organized via the student officiary who already has to distribute too much information towards students.

We learned that continous promotion is needed. it cannot be a single event. Gent will look into the development of app's and online version for the walking map.

In order to make rational choices in selecting pedestrian zones and streets where the infrastructure should be improved in priority, it was advisable to collect good data first. From the beginning of the ELAN project up to the winter of 2009-2010 a lot of data were assembled throughout a variety of audits (Nov 2009; Jan 2010; Feb 2010). The engagement of different target groups was welcomed, including information from the Department of Citizen’s Engagement, a student’s investigation and reactions from citizens to a number of appeals.
In 2009 and 2010 several questionnaires on walking were organised to gather comments, suggestions and insight on mobility habits from students in higher education, citizens and commuters. These different inquiries have culminated into a priority list focusing on the accommodation and accessibility in the direct neighbourhood of unsafe cross points, bus or tram stops and in the neighbourhood of the railway station. It indicates clearly the status of the different problems and signals in the matter of walking infrastructure. In some cases solutions have been found and were implemented by the end of the CIVITAS project. In other cases further examination and investments are still necessary.

In the Pavement Action Plan the entire surface of the City of Gent is divided into 20 zones. All of them are analysed. Based on the functional needs and the current quality of pavements etc., for every zone a priority list is determined with a selection of (parts of) streets where the pedestrian infrastructure will be tackled.
Within this framework of consecutive city zones, priority was given to the zones that are part of the CIVITAS corridor. The most northern part of the corridor (zone 8) was first discussed at the end of November 2009, the most western part (zone 9) was treated at the end of January 2010, the zone between the main railway station (Gent-Sint-Pieters) and the heart of the city (zone 10) followed at the end of February 2011. Zone 12 at the southern side of this station followed immediately after that.

The actual implementation of the infrastructural measures within the CIVITAS corridor started in August 2011. In the summer of 2012, apart from a few exceptions, the planned measures have been implemented. 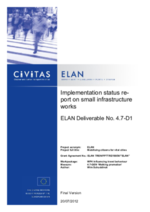 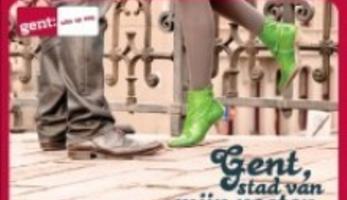 Walking in Gent can make you famous

In the first half of June 2010 the City of Gent launched its very first walking campaign. With the motto ‘everything in Gent is in walking distance’ the city...