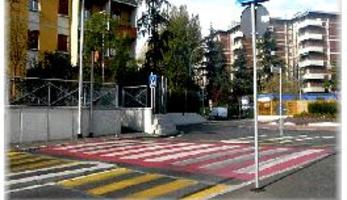 Bologna adopted ambitious goals to improve road safety and is stepping up its efforts with CIVITAS MIMOSA.

In 2003, Bologna adopted its Urban Traffic Safety Plan based on the Italian road safety plan and the EU’s White Paper on Road Safety. With CIVITAS MIMOSA Bologna will test a range of road safety interventions and assess their merit. A particular focus will be on the introduction of a 30 km/h speed limit pilot area and exchanging information with other MIMOSA project partners to learn from other cities’ experience.

Bologna’s Urban Traffic Safety Plan from 2003 set out to halve the number of fatal accidents and accidents with serious injuries by 2010. Since the adoption of the plan, numerous measures have been implemented and intermediate results from 2005 confirmed that the city was making good progress. However, achieving the goal to halve casualties and serious injuries has proven challenging. Bologna realised that conventional measures such as providing a set of infrastructural interventions are not sufficient to reach its ambitious goal. Instead, the city decided that future efforts must take a long-term approach and involve citizens and stakeholders to a greater extent.

A scientific and detailed roadmap has been outlined in the Road Safety Masterplan. The plan identified the need for a comprehensive study to provide a set of technical insights and a statistical report on road accidents, a list of black spots and priority areas on which to concentrate efforts, as well as detailed plans for individual crossroads or streets.

Bologna has compiled a study based on statistical data on road accidents. The city has already introduced a 30 km/h speed limit zone in the Garavaglia area. It has been presented to citizens at a public event. At pedestrian crossings, two traffic islands were installed in the middle of the road and 14 new traffic lights were deployed to make pedestrian crossings safer. A central part of the area was refurbished with a new public garden and then pedestrianized. Furthermore, the city installed 17 so-called variable-message signs (VMS) on 12 roads. These panels display the speed of vehicles passing by. All of these interventions were evaluated by comparing the reports on road accidents and fines by the municipal police from before and after the intervention. Bologna has also run a communication campaign.
Following the pilot implementation of a 30 km/h speed limit area, in 2012 a second phase of the works started in the Garavaglia area followed by one in via Sacco and via Vanzetti (outside MIMOSA). The strategy for the Sacco and Vanzetti 30 km/h speed limit area was completed in cooperation with RER.
On top of this, dissemination activities on road safety have been carried out at public events and road shows. In addition, continuous monitoring of ‘black spots’ was carried out to update the accident and injury database and fine tune actions tackling future situations. According to findings so far, works have been implemented at black spots to improve the situation, in particular in 15 out of 30 black spots, where infrastructural and road safety interventions were planned, works have been completed or are underway. The remaining 15 interventions are at different planning and implementation stages.

This measure was linked up to other measures, which shared the high-level objective to improve road safety, namely “Safer roads to school” and “STARS” (STAR is a system for red light crossing control and automatic enforcement, consisting of a camera installed inside a protective device). Each above mentioned measure is characterized by its own target, objective and domain: measure 5.1 (Urban traffic safety plan)  refers especially to vulnerable users and interventions to improve safety at crossings, measure 5.2 (Safer road to school) is targeted to young people, while measure 8.5 (Stars: Automatic Enforcement of Traffic Lights) focuses on reducing improper driver behavior at crossings equipped with STARS technology.

In measure designing, Bologna expected that the activities under this measure would have contributed to halving the number of casualties and serious injuries from road traffic in the urban area.
Results obtained so far record a 46% reduction of accidents at crossings with traffic islands (comparing data from before the interventions and after the end of the measure) along with a 34% reduction in accidents at crossings with traffic lights.
Furthermore, the bundled indicator (including accidents, people injured and killed all over Bologna territory, thus encompassing locations where no interventions were planned/made) show a significant reduction in values: 21.1% fewer accidents in 2010 against  2007 (the last year without any Mimosa measures) and 21.65 fewer people injured over the same period. In addition, thanks to the realization of the 30 km/h speed limit area under the MIMOSA measure, a 26% reduction in recorded flows was also achieved. 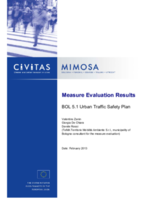