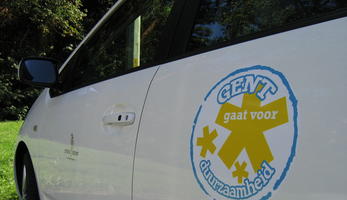 Efficient use of the city fleet
A City fleet management cell has been installed to increase the efficiency of the city fleet. By providing the car fleet at important and central locations and by providing a reservation tool to organise the mutual use of the pool cars, the city fleet will be used more efficiently. We hereby focus on standard vehicles, more precisely passenger cars.
We will introduce clean fleet vehicles and sustainable fleet management for city administration in support of local air quality objectives within each of the CIVITAS-ELAN cities.

This measure consisted of improving the private fleet management for the employees of the City of Gent. The main goal was to reduce the emissions of the vehicle fleet by increasing the efficiency of the fleet and reducing the use of fossil fuels in the City fleet. The number of vehicles was reduced, cleaner vehicles were introduced (e.g. 14 electric cars & 1 hybrid truck) and carsharing was promoted. Also 54 employees had the chance to reduce their fuel consumption through an ecodriving training.

The measure had the following deviations:

It is advisable that a city has a permanent city fleet manager to monitor the cleanliness of the city fleet and to manage the purchases of the fleet. Gent dropped the implementation of biodiesel for several reasons, therefore it is advisable that city does a feasability study before thinking of introducing biodiesel. As Gent introduced ecodriving, we saw that a lot cars had insufficient tyre pressure. This leads to higher fuel use and faster deterioration of the tyres.

Since the city of Gent currently does not have a city fleet management tool and no permanent GPS-tracking devices in the cars, it is impossible to do an accurate follow-up of the cars. The city of Ghent can only keep on spreading the message about energy efficient driving (mailings, stickers in cars, car policy,..) and will continue to stimulate car users to optimize tyre pressure in portable station or at locations provided by fuel suppliers.

The total fuel use of the city fleet decreased by 24%. This is a result of removal of 45 standard cars from the fleet at August 2011 and the replacement of vehicles by a cleaner one following the durable purchase strategy as including the environmental scores as a selection criteria in the tendering procedure.

By removing 45 cars and 38 light freight from the fleet, employees start thinking about their transport and were "forced" to take a bike. Sometimes this leads to a positive conclusion that in the city centre you can move faster by bike than by car. This even leads to 30% reduction of driven km in the car fleet of the city. Also the total number of km driven of the light freight is reduced by 11%. 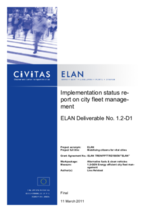