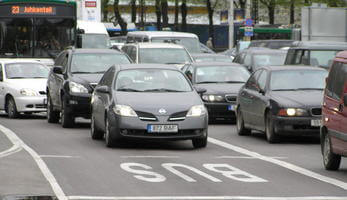 The measure aimed at creating a traffic counting network for counting and real time monitoring of vehicle traffic on the main street network of Tallinn. The cameras monitor traffic flows, speeds and classifications on all lanes and turns of the intersections in real time and also create automatic traffic reports for traffic planners and consultants for later analysis.

The measure was aimed at creating a fully automatic traffic counting network for counting and real time monitoring vehicle traffic on the main street network of Tallinn. The counting cameras monitor automatically traffic flows, speeds and classifications on all lanes and turns of the intersections in real time and also create automatic traffic reports for traffic planners and consultants for later analysis. The aim of the measure was getting counting results without any manual input or intervention.
The detailed monitoring system is important for traffic planners, because besides helping to optimise vehicle traffic (and thus probably supporting car usage) it helps also to monitor and evaluate changes created by sustainable transportation actions and measures.For public users a web page and mobile applications were created for sharing real time information on traffic situation on different interchanges.

The measure was implemented in the following stages:
Stage 1: Preliminary study on possible locations of the monitoring cameras (11.2009 – 03.2010) – A preliminary study on possible implementing locations was carried out by TUT together with measure 8.1 Bus Lane and Red Light Cameras.
Stage 2: Preparation and carrying out of the public procurement (03.2011 – 11.2011) –The public procurement process was initially started together with measure 8.1, later they were separated.
Stage 3: Installation of the monitoring cameras (11.2011 – 04.2012) – The installation was carried out despite winter conditions.
Stage 4: Testing of the monitoring cameras (04.2012 – 07.2012) – Testing period for automatic reporting and real time information map for public users.
Stage 5: System operational (07.2012 - ) – System operational with some corrections left to do with automatic reports.

While the measure was initially intended for traffic experts only, a secondary features were added to the measure by the contractor who installed the systems: the real time traffic flow is also available for the public in a form of an overall Tallinn map and detailed views of the monitored intersections on the Tallinn website on the webpage: http://seire.tallinn.ee/en. The webpage is also easily accessible from smartphones. The usefulness to the public of real time information on intersection capacity is that it makes it possible for car users to alter their route if some intersections are more congested than others.

Besides the web solution, mobile applications were created for smartphones with iOS (iPhone) and Android operation systems. The applications are named “mTraffic” for both operating systems and are available for free. The mobile application was mainly developed for system developers and city officials to give possibility to check the system status from phone but was also made available for the public. Therefore no marketing was done for the application.
The system is based on video cameras and special software, detecting vehicle movement, classification and speed from the video picture automatically. The counting information (not video) is submitted to a central server in real time and the cameras are constantly active. The automatically created data for traffic planners and consultants can be obtained from the system in a variety of reports and for any time periods, containing classification by vehicle categories.

The system was installed on 10 intersections in Tallinn and 1 straight road section on the western border of Tallinn. The selection of locations was done from a list of 56 possible locations listed in a preliminary study. The implemented number of intersections was defined by the amount of resources available for installation and running of the cameras, the final number of locations was fixed with a procurement result. The long list of possible locations was created in order to define the possible needs for expanding the monitoring network in future, it was not meant to be implemented at all locations.

Evaluation of the measure was based on interviewing users about their acceptance of the monitoring system automatic reports and the usage of public services. Traffic planners and consultants were asked about their acceptance on the reporting system and usage of public services was measured by visits to the web page and mobile application downloads.

The key results from evaluation were the following:
• High appraisal of the counting system from traffic experts  – The traffic experts gave very high appraisal to the system, varying from 4,5-5,0 on a scale of 1-5;
• Modest use of the public traffic monitoring web page – The use of the page has stabilized to around 2000 page visits per month in the period of July-September 2012.
• Low usage of public traffic monitoring mobile applications – The total number of downloads of the free applications has been 152 times in the period February-September 2012.

The most important drivers encountered during the measure were:
Planning driver – Clear understanding of the measure after analysis of locations and technical demands for monitoring cameras and their outputs.
The most important activities resulting from barriers and drivers were:
Organizational activity – Several companies were invited to introduce their equipment and technology in order to plan measure implementation. This was activity caused by the lack of independent expertise in Tallinn and Estonia.

Recommendations for measure replication:
The measure is replicable but with reservations – The possibility of successfully replicating the measure to a large extent depends on the city where it is to be replicated. Technically there are no obstacles for using the system elsewhere but the needs of traffic planners and car users might be very different.
Planning the whole network – Even if the resources for implementing the monitoring system are not sufficient for creating a full scale network covering the whole city, the full network should be planned before implementing the first parts of the system. 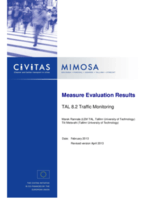