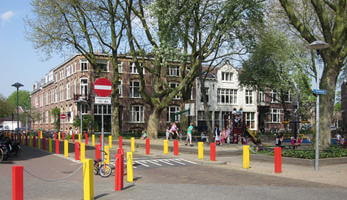 The city of Utrecht awards Road Safety Labels to primary schools that proactively address road safety issues. The aim of the measure is to improve road safety in urban areas, particularly around schools.

Children in particular are a vulnerable group in road traffic and need to learn how to act safely. In practice the surroundings of many primary schools were not sufficiently safe and recognisable for road users.  Road safety of schoolchildren is a shared responsibility of the city, the schools, the children and their parents at all of Utrecht’s 104 primary schools. So far, road traffic education had been given low priority because school- curriculum were already chock-a-block with other important matters. The Utrecht Road Safety Label offers schools the opportunity to set up and execute a structural traffic education plan at their own pace, to raise awareness of road safety by education and to improve road safety around schools.

The measure ‘Road Safety Label’ had the objectives of increasing road safety in primary school areas, reducing the number of car trips and increasing of the number of walking-trips and trips by bicycle to primary schools. The objective was to create recognisable, safe school surroundings and increase the satisfaction with road safety in primary school areas among children, their parents and teachers. To stimulate high quality traffic education at primary schools and to guarantee this education a quality label for primary schools was developed. This Road Safety Label shows that a school has made an effort to achieve traffic education and road safety around the school. Nine out of the 12 provinces in the Netherlands work with this kind of quality label. In Utrecht the Province of Utrecht was responsible for the Utrecht Road Safety Label (URSL).To determine whether a school is qualified for the URSL a list of criteria is being used. Schools need to embrace several key elements, such as: traffic safety education, the participation of parents and commitment to the establishment of a safe environment.  A Road Safety Label-consultant indicates which criteria need the school's attention for improvement. The school appoints a road safety coordinator who is in charge of the project, and - if necessary- supports the implementation. If the school fulfils all criteria, it will be awarded the Road Safety Label. This consultant makes plans for maintaining the label and there will be checks every two years. Even though the measure is primarily concerned with road safety, it will also positively affect environmental issues.

The aim was to achieve a clear, recognizable and uniform design for all school surroundings. To reach this, the city developed a plan in 2008 for a school zone. Utrecht chose to use existing materials, such as road signs, sustainable road markings and poles, instead of new concepts. These materials were preferred because they have a legal status, are easily recognisable and fill the existing need.
In the first months of 2009 this school zone was implemented in five pilot locations in which eight primary schools are situated. In the autumn of 2009 the evaluation took place. In this evaluation the following aspects have been considered: the experiences of stakeholders, satisfaction about the school zones, vehicle speed and costs of the school zones. The results of the pilot were positive and promising, and were described in a report in which the department of traffic and transport recommended to continue with the implementation of the school zones at the other schools that participated in the Road Safety Label project.

During the implementation of the measure several barriers were encountered. It was a complicated task to have schools involved in the URSL due to the fact that schools are already busy with their own activities. It also prove to be difficult to involve parents, and the many changes in the schools led to delays. The uncertainty about the regional budget and the involvement of the Province were barriers that led to many time-consuming discussions and additionally needed municipal budget.
Important drivers were the positive political and societal attention for road safety of schools which increased and ensured the availability of the municipal budget. The school zones turned out to be a major attraction for new schools to start participating in URSL.

Increasing the road safety of children still is a popular measure on a political and social level. This kind of road safety label can easily be transferred to other countries, although it should be adapted to the local context. The implementation could take place at the national or regional level, and if the city is large enough with a sufficient number of schools, the development of a school road safety label would also make sense at the city level. Also the school zones of Utrecht are easy to implement, cheap and recognizable in every (European) city.

In order to successfully implement such a measure, there are several important recommendations that can be made based upon Utrecht's experience.  It has proven to be effective to pro-actively approach the school by a partner with a firm understanding of the practices of a school. Also, schools should be offered a consistent package of information that shows why it is in their interest to participate. Additionally, school participation needs to be free of charge. This assures that the objectives set by the city are really met. The establishment of a local project team that combines all the necessary skills is a key-factor for an efficient measure management.  It is also crucial to involve politicians and high level administration officials in the process by explaining to them correctly and on a continuous basis the needs and advantages of the measure.

The measure is a huge success story in Utrecht. Based on these positive results, it was decided to invest additional money to be able to continue the label for the participating schools in 2013.
In October 2012, 38 primary schools received the label and another 32 schools were actively working on meeting the criteria. Although 80% participation was not reached; the 67% achieved is considered a good result because schools are participating voluntarily and it thus shows the high acceptance of the measure. So far 54 of these 70 participating schools were redeveloped with a school zone.
The modal split was measured with questionnaires among school children, parents and school teachers. The bicycle is the most used transport mode to travel to primary school, followed by walking. Interesting result was that according to the children that replied to the survey, car usage in two of the three URSL schools had decreased, whereas the results of the survey among the parents (which must be treated as an indication only) showed an increase of car usage on two of the three URSL-schools, whereas a decrease of car usage was measured on the non-participating school.
In 2011 on average 12% of parents still bring their children to school by car. It has proven to be very difficult to convince parents to use the bicycle or walk to school instead. However, compared to the other modes (cycling/walking) this percentage is low.