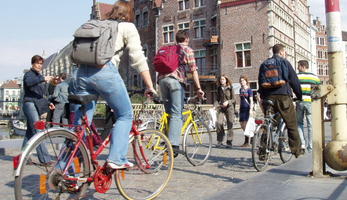 Ghent has widespread cycle infrastructure, as well as leisure and functional cycling routes. However, these routes often show gaps or unsafe crossings or junctions. This measure will work on developing safer and better cycling routes in the CIVITAS ELAN corridor.

By interviewing users, counting bicycles, registering the number of accidents, Ghent want to improve the cycling routes and promote cycling in the city. The city will provide good alternatives to the use of private and individual cars and encourage the use of bicycles by improving a decent and safe bicycle infrastructure. The city will incorporate cycling measures as complementary initiatives within the targeted demonstration corridor and introduce measures to give priority to safe cycling movements, e.g. the reallocation of road space, surface treatments, changes to junction priorities and timings.

This measure focuses on the implementation of safer and better cycling routes in the corridor by improvements of the main crossroads on the cycling routes from the main train station Ghent Sint-Pieters towards the city centre and the university area. Also other cycling routes to and from the station were audited and improved within this measure. A second submeasure, which is a pilot project in Belgium, is the redevelopment of the Visserij as a cycle street. The Visserij changed from a road with mixed traffic (30 km/h) into a cycle street. The concept of the cycle street is that cyclists have priority and cars are only “guests”. The Visserij is the first cycle street in Belgium. For promotion and stimulation of safe cycling, but also for data collection, the cycling barometers were installed at the Visserij and the main cycling axis in Ghent, the Coupure Links. 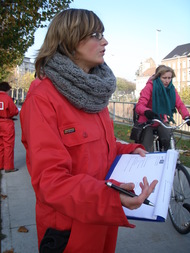 The first 'cycle street' is implemented. This is a street where cyclists have priority and cars are only “guests”. Evalation showed that there are 36% more cyclists in 2012 than in 2010.

Key result: Significant increase in cycling due to the implementation of the cycle street

Key result: Cyclists are convinced of the usefulness of the cycle street, but do also have some remarks.

Cyclists are not unanimously positive about the cycle street. They are convinced of the usefulness of the concept, but raise several aspects that can be improved. For example, cyclists are not always aware that they are allowed to cycle in the middle of the street even when a car approaches (this was communicated to residents of the Visserij but not to cyclists) and bad application of the red coating (contractor did not meet the specifications).

Promotion
A winter campaign was set up (2011) to encourage people to keep on cycling. A promotion team popped up on different location and different hours of the day to distribute warm gloves. The message written on the gloves was: "every cyclist counts!" people had to fill in a small questionnaire to receiv a pari of gloves.

The city of Ghent will certainly continue with the construction works to improve safety for cyclists. Many cycle lanes will be constructed within the coming years.
As the bicycle street is succesfull, this concept will be introduced in other streets in Ghent. Analysis need to be done which streets are eligible for being a cycle street. First suggestion is a busy cycling axe, with over 8000 cyclist a day.

Ghent forced a legal adaptation of the 'cycle straat' through its pilot. A traffic sign was officially launched in spring 2013 and as an extra outcome, many Flemish cities followed the example of Ghent and installed cycle streets. 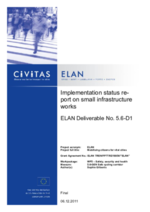 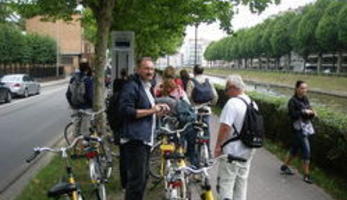 On 28 and 29 June the city of Ghent received a visit from 20 CIVITAS colleagues from six different countries for the CIVITAS cycling study tour. People from Zagreb...