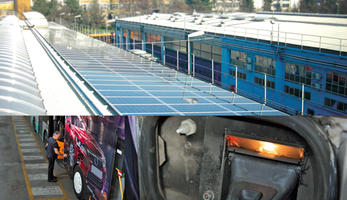 Brescia is keen to clean up its public transport fleet and has aimed to produce enough renewable energy through a new photovoltaic system to power hybrid buses of the Public Transport Company.

The measure belongs to the thematic area of 'alternative fuels' and concerns the production of energy by enlarging the existing Brescia Trasporti (Public Transport Company in Brescia) photovoltaic system. This was done to achieve independence in terms of energy and by recharging the batteries of hybrid busses which are part of Brescia Trasporti fleet.

The measure addressed energy production and emissions reduction. It is important to highlight that this action strictly belongs to Brescia Trasporti policy. During the first year of implementing the new photovoltaic system, energy production was doubled. To obtain such a result it was necessary to design the system and obtain approval of the Municipality, as well as purchase and install it alongside the existing one. In order to evaluate the objective achievement, a set of indicators was developed and measured to monitor the objective achievements, check the emission levels, and track operating costs.

The new plant characterised by a peak power of 76,8 KWp was built between January and March 2011, beginning operation in April 2011. In its first year (May 2011 to April 2012) the new system produced 97.736 kWh, almost twice more than the previous power plant. Furthermore, in the first year, the new system entailed reduced CO2 by 52 tons of CO2 and saved 22 tons of TOE (tonne of oil equivalent). In terms of impact, the measure is considered successful. 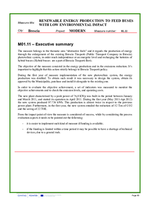