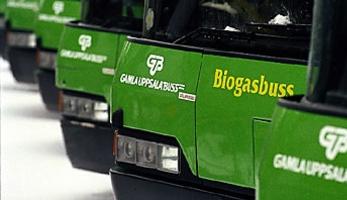 The use of biogas-fuelled vehicles in sensitive and densely populated areas in the city centre was optimised in order to reduce emissions in a cost-effective way.

The overall objective of this measure was to demonstrate the possibility of substituting conventional heavy diesel buses and trucks with clean vehicles running on renewable fuels.

At the time of measure implementation, the local transport operator Stockholm Transport was operating around 1,700 buses through subcontracted entrepreneurs who owned the vehicles. Of these, 250 operated in the city centre and ran on ethanol.

The specific aims of the measure were to:

The first 21 biogas buses were delivered in 2004 (10 MAN and 11 Volvo), and after assessment a decision was taken as to which make to choose for further purchases.

To secure the supply of biogas, Stockholm Transport signed a long-term contract with the supplier Stockholm Water Company, guaranteeing the supply of gas for the buses for 20 years. The gas was delivered to the bus garage via a pipeline from the production plant at Henriksdal. A local storage facility and a filling station were built at the premises of the bus garage, which are not open to the public.

In 2002, the board of Stockholm Water Company decided that by 2007 all the diesel trucks subcontracted for its work should gradually be replaced by biogas trucks. Most of its subcontractors were private transport companies, and, to encourage them to procure clean vehicles, Stockholm Water Company offered a better price for clean vehicle contracts.

The work on promoting clean vehicles continued beyond the end of the TRENDSETTER project.

By 2006, the measure had reduced emissions of fossil carbon dioxide by 86 percent and emissions of nitrogen oxicdes, particulates and carbon monoxide by 50 percent, although hydrocarbon emissions were 20 times higher.

Maintenance costs rose from EUR 0.033 per km to EUR 0.045 per km for the biogas Otto engines. Motor oil consumption was double in the biogas vehicles compared to diesel vehicles, and fuel consumption was 60 percent higher. Noise levels fell by 50 percent. More than 90 percent of drivers would recommend others to drive biogas heavy vehicles.

As a result of continuing efforts beyond the TRENDSETTER project, 130 biogas buses and 500 ethanol buses had been put into operation by Stockholm Transport by 2010.