Coimbra developed a technical, environmental, economical and financial feasibility study for the construction of a small-hydro power plant at an existing local river dam. The future plant can supply the electricity needed for Coimbra's trolleybus and electric minibus fleet.

This measure provides the elements required for a future decision concerning the feasibility of supplying the trolley car electric traction network with renewable and locally produced energy. It will also help to assess the potential impact on the environmental. In this way, the study can contribute to decreasing the energy consumption of fossil fuels and, eventually, to reduce the cost of public transport, making this means of transport even more sustainable despite its high capital cost. By using the already existing river dam, there are reduced capital costs for construction work and lower operating costs. The surplus energy of lean and night periods can be sold to the electric energy grid, which will increase the internal rate of return and reduce the payback period.

The city aims to create the knowhow to help the public transport company SMTUC to make decisions regarding autonomously producing (or in a partnership) its own renewable energy production for its trolleybus network and minibus fleet. Financial engineering and institutional arrangements (self production or Public Private Partnerships - PPP) will be studied for several scenarios. Seasonal water supply variation, optimal dimensioning of the generator systems and fish migrating facilities will also be studied.

The main research into how to implement an electric energy production system (small- hydro) has been carried out in terms of the available technologies. Along with the simulation of the exploration of the small hydropower plant, some preliminary laboratorial tests have also been carried out in a hydraulic channel to evaluate the performance of key system components.

Since October 2010 an extended version of the Engineering Feasibility Report was delivered with the main conclusions obtained on the comprehensive technical feasibility study. The city is currently waiting for the National Water Authority (INAG) administrative response so it can finish the basic layout of the project.

In 2011 the economical and financial model were concluded. This model allows the economical and financial feasibility study of all the layouts, according to feed in tariff stated in: 1) the legislation included in the “Decreto Lei n.º 225/2007”, published in "Diário da República, Serie I, nº 105”, of May 31st, 2007, with the amendment of the Declaration nº 71/2007; 2) under similar conditions to the recent calls for concession and implementation for small hydro-power plants, announced in the "Diário da República nº 201, Serie II” of October 15th, 2010.

The financial analysis computational model allows the consideration of:

It is estimated that the electricity generated more than covers the needs of the local transportation services and can contribute to Municipal revenues by selling the surplus electricity to energy companies.

A detailed small hydropower operation computational model has been developed which provides a DEMO layout of the Coimbra Dam Bridge equipped with turbine-generator units. The model allows namely the overture state of each of the 9 radial gates, the flow in each radial gate, the number of operating turbine-generator units and respective energy production. This computational model is very portable, which is very convenient for dissemination actions.

Coimbra expects that the measure will: 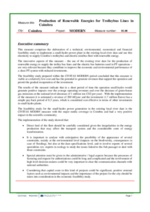 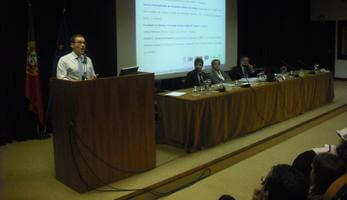 Coimbra discloses its preliminary findings on the feasibility of implementing small hydro technology for the production of renewable energy at an existing mini-dam....