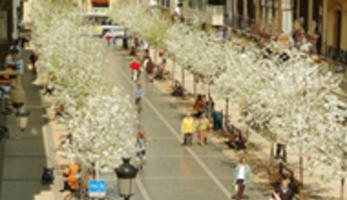 Within this measure 300 households that were using their private cars for trips within the city, received personalized travel advice and over 200 were provided with a free public transport pass and other incentives to try out sustainable transport options. The goal was to achieve a reduction the number of private car trips among these households, also after the three-months trial period.

Donostia-San Sebastian developed over 200 Personalised Travel Plans in the districts of Amara and Antiguo. The main objective of the Personalised Travel Plans (PTP) is to achieve a reduction in the use of cars and an increase in walking, cycling and the use of public transport. This is done by means of initial data collection, providing the citizens with information on their best option for use of other sustainable means of transport as an alternative to private vehicles, combining this action with incentives such as public transport vouchers or gifts.

During the house visits, residents were presented with public transport options for their specific trips and the difference in costs and travel time compared to their current travel choice. In addition, a comparison was made between the emissions caused by the different travel modes used for the specific trip. Households interested in exploring sustainable transport options were offered a free public transport pass for three months to test the service. Before, during and after the trial period, the participants received questionnaires to assess their mobility behaviour.

The measure was presented to the general public in September 2010 during the European mobility week and received a good coverage in the regional press. In continuation, a direct mailing campaign targeted 3.000 households of the Amara and Antiguo districts. The mailing contained an invitation letter from the Mayor, a leaflet explaining the campaign and a copy of the questionnaire on mobility behaviour.

The mailing was followed up by 2.000 telephone calls to make appointments for face-to-face interviews or to carry out the questionnaire on the phone. The residents also had the opportunity to complete this introductory questionnaire online. From the start of the project a free phone number was provided for any inquiries regarding the project and its development.

After the first survey round, the project team presented 300 personalised travel plans to the participants during house-visits. Each plan was presented with a map of the route and made a comparison between the private car and the proposed alternative mode of transport. For each participant, the most suitable out of the four available alternatives was proposed:

The alternatives were compared to the private car using the following indicators:

Even though there were 96 participants that decided not to continue with the program after the incentive phase (nearly 30% of all participants), and 31 additional participants were not reached one year after the first assessment, evaluation results reveal a significant success in changing travel behaviour.

One year after the three months trial period finished 82 participants remained using the alternative option provided by the PTP (three months after the trial period the number of participants who changed their transport habits was 102). This had a significant effect on modal split distribution and transport related emissions. Car usage considerably decreased among participants in the PTP initiative (12% in Amara and 8% in Antiguo districts), accounting for over 30.000 kg/year CO2 savings.

In both cases, acceptance level towards the initiative was above 96% of the surveyed people, with several participants ready to make a small sacrifice if the alternative transport is environmentally more sustainable (although not perceived as positive for him/her self).

From an economic perspective, the Cost-Benefit Analysis conducted revealed that PTP would require a four years period of time with an equivalent level of success to achieve a positive economic result (if only monetisable costs and benefits are considered). After this four year period benefits get slightly higher than costs (the benefit to cost ratio after four years is 1,10), and the change of Net Present Value of the measure is 48.896,83 €, which means that the NPV of this measure is higher than the one associated to BaU scenario. This result reveals that PTP require a relatively short time to become a cost-effective measure. 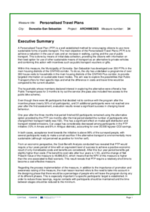 Which transport mode needs more road space: the private car, the bus, or cyclists and pedestrians? As part of “without my car day”, 120 citizens of San Sebastian...