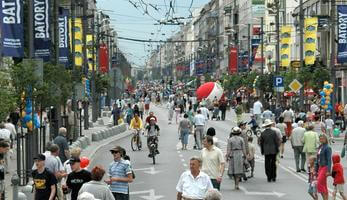 Gdynia’s draft SUMP from 2009 contained a mobility management concept with the aim of reducing car traffic in the city centre. With support of data from the updated traffic model, consultative processes were initiated to temporarily or permanently eliminate car traffic on chosen parts of particular streets and – after DYN@MO – to establish the first pedestrian area in the city centre with broad political and public support.

Eliminating traffic on roads is always a difficult political decision. The idea of opening pedestrian areas may be popular and well known but to implement such a measure in Gdynia is still a very innovative endeavor. Cities in Poland which do have pedestrian areas are usually very old cities and it is easier to gain political and public approval to create pedestrian areas by closing the main historical square or street – a national heritage. The real challenge is for young cities like Gdynia which were built in 1920s and 1930s already with the intention of allowing traffic flow through the main streets. To close one or two of those main arteries – the main shopping streets in Gdynia – is very innovative and shows real maturity in introducing sustainable transport in the city.

Before DYN@MO, there were no pedestrian areas in Gdynia. The City with its rapid economic development has been undergoing a gradual transition from industrial/harbor city into a business centre. Areas in the vicinity of the harbor are subject to redevelopment. Considering the character of the city and the remarkable role of tourism for the city, there is still a necessity to increase the popularity of the main area of the city centre between Gdynia Central Station – Starowiejska Street – Swietojanska Street and Molo Poludniowe. The measure builds on the successful rehabilitation of Swietojanska Street undertaken within CIVITAS I. The newly designed road gained different specificity as a result of the above-mentioned project which achieved and significantly contributed to increasing the popularity of the area among pedestrians.

Temporary  closure of parts of the city’s road network to vehicle traffic has allow and stimulate communication among local authorities, the public and other stakeholders such as shopkeepers in the city centre. It has facilitated the development of procedures, rules and regulations, as well as a structure for establishing pedestrian areas. Research has been done within measures G1.2 Community project studies from the SUMP and G3.1 Traffic model development to expand Gdynia's SUMP, on the scope and timeframe for closing Starowiejska Street and/or Swiętojanska Street in the tourist area of the city centre. The necessary traffic reorganisation has been developed by Gdansk University of Technology.

The main activities within the preparation and planning of the measure involved:

Closing the streets with traffic reorganization in the city centre will be implemented after the successful consultation with the public and after the procedures, rules and regulations and structure for setting up the pedestrian areas have been developed.

During the implementation phase the following tasks has been executed: 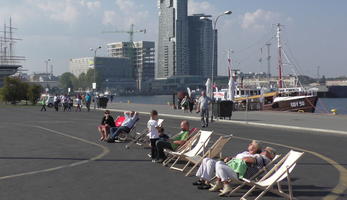 Is introducing more pedestrian areas in the city centre of Gdynia a good solution? In the end of 2014 Gdynia held a series of public debates within CIVITAS DYN@MO...