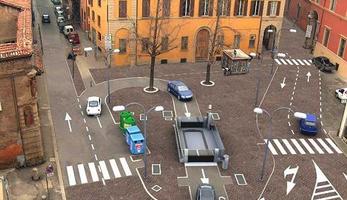 Bologna wants to enhance its Park and Ride system to stimulate greater use of it and promote intermodal travel.

Medium-sized cities frequently find it difficult to cover all passengers’ needs through the public transport network. Park and Ride solutions offer a good solution to satisfy transport needs in a sustainable manner. An improved Park and Ride service is foreseen to reduce on-street parking, while generating revenue that will balance maintenance costs. The measure consists of three main components: the introduction of a new Park and Ride car park and improvements to existing ones, better public transport connections, and the development of an electronic system through which one can book parking spaces in advance.

In order to ensure a reliable and safe service, the facilities will be equipped with a video surveillance system in the parking area. There will be access control, an automatic payment system and bike racks with intelligent locking systems, as well as charging points for electric bikes. Users of the Park and Ride service can use their own bikes or rent a conventional or electric bike. An information campaign will promote the new and improved offer. After implementation there will be a testing period followed by an analysis of results. Bologna already set up some new Park and Ride parking facilities. They offer inexpensive fares (some car parks are free if the driver takes the connected bus shuttle), as well as public bike sharing, video message signs for information on the spot and Internet booking and payment systems.

Under CIVITAS MIMOSA, Bologna has improved the already existing car park “Tanari”, which is connected to the city centre by a shuttle bus service. The shuttle line routes were improved and optimized during the MIMOSA project development in accordance with the pedestrianisation of zones in the city centre. Parking is now free of charge for drivers that leave their cars and take the bus shuttle (they only pay for the bus ticket), season ticket holders, people who ride by bicycle to the final destination, and employees of particular companies and public bodies.

At the “Tanari” site, a technical analysis and implementation plan has been developed for new car and bike infrastructure such as new sheltered bike racks. The lighting facilities are provided through solar panels. The city also conducted a technical analysis concerning improvements to the lighting system of the entire parking area. In the course of 2011, Bologna completed the installation of the new sheltered bike racks, introduced an additional exit to the parking area, and finished improvements to the lighting system. Furthermore, the number of available parking spaces has doubled from 400 to 800 thanks to the opportunity to use the area that was previously allocated to the depot for removed cars. The video surveillance system was improved installing controlling cameras in the parking area that are controlled from the central surveillance point.

Along with the improvements implemented in Tanari, new car parks have been carried out. A new Park & Ride area, named “Euraquarium”, is located in the eastern part of Bologna, close to an intensive traffic route covered by some of the main bus lines directed to the city centre. It offers 160 parking spaces, mainly reserved to residents’ vehicles. This new car park will allow to create a car-free reserved bus lane on the main road (i.e. Mazzini street) where today the space is occupied by parked cars. The parking area opened in April 2013.

Furthermore, after the analysis of technical, organizational and legal requirements, a demo of new electronic booking system have been set up, to allow reservation of a parking place.
The study is available at:
http://www.civitas-initiative.org/index.php?id=79&sel_menu=18&measure_i…

Dissemination activities on park & ride services have been carried out for existing parking areas and are also planned in the future for the launch of new P&Rs.
To evaluate the service quality, a survey was carried out in June 2012 contacting users of the Tanari parking area (overall 333 people were interviewed). The main reason given (71%) to the question why they use the Tanari parking area (multiple answers were possible) was the presence of the bus service, the second one was the fare convenience along with the closeness to the city centre or to the final destination. Only 8% chose the availability of the bike service.
A phone survey was addressed to 300 car users, through a telephone survey in September 2012, about the awareness of Park & Ride. Only 40% knew the interchange opportunities of the existing parking areas; on the other hand 88% of the sample have shown a significant acceptance of Park & Ride as an important issue to strengthen sustainable mobility.

Outcomes achieved so far show that after the improvements performed under MIMOSA, the parking area Tanari is a successful example of intermodality:
- people can park their cars and take the bus shuttle to the city centre,
- the area is also equipped with racks where users can park their own bicycles to be used to ride to the final destination after parking their car,
- bicycles of the “C’entro in bici” service (public bike sharing of the city) are available inside the parking area.
In terms of car park use:
- users of the parking area Tanari have more than doubled, increasing from 36,000  in 2008 to 95,000 in 2011 (+163%). The users were estimated on the basis of the tickets emitted,
- from 2008 to 2011 revenues increased by 34% (paying users correspond to around one third of the total),
- car park occupancy has increased by 19% from 2008 to 2009 and by 65% from 2009 to 2010. The rising trend has been confirmed comparing 2011 to 2010 (+34%). A key item for this achievement is represented by the fare policy that strongly supported park & bus and park & bike facilities, offering free parking to bus and bicycle users. 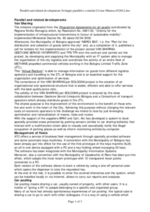