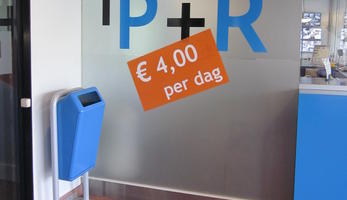 The city of Utrecht aimed to limit daily car traffic into the city by promoting Park and Ride facilities.

Since May 2012 Utrecht has three P+R facilities at the western and southern borders of the city. Visitors of the city and commuters can park their cars there and travel further to the city centre by public transport or bicycle. The P+R facilities make a substantial contribution towards keeping the city accessible and remaining an attractive city to live in, offering its inhabitants a clean and healthy living environment. But these transfer hubs at the city edge were not used enough. The feeling was that people did not know where the P+R's were located and what the advantage of using them was. Within this measure a P+R marketing and promotion plan has been developed. This comprises the implementation of one consistent formula for the installation and promotion of P+R facilities in and around the city of Utrecht with the objectives to:
- increase the awareness of the P+R facilities,
- increase the usage of these facilities and thus to limit inbound passenger car traffic into the city centre.

Two research and development activities took place: a P+R marketing strategy and promotion plan was developed in 2009, and marketing research has been conducted to get more insight into the present P+R users and the group of non-users results.

Based on this research on the group of commuters and the group of the so-called ‘social-leisure’ visitors of Utrecht (for shopping and leisure), the most promising target groups were identified (e.g. visitors of special events and commuters who are exposed to temporary disruption).
For the execution of the feasible actions a tender was launched in autumn 2009. The selected contractor installed a website where people can find information about the (locations of the) P+R facilities (www.slimutrechtin.nl) and has executed various specific promotion actions for the P+R in the course of 2010. In 2011 the contractor formulated a new action plan. The target group for the promotional activities in 2011 were mainly commuters. Furthermore in 2011 Utrecht and its subcontractor were working on an innovative P+R app which shows the location of the closest P+R, the opening hours and costs, etc. As first Dutch city with a P+R application for mobile phones, the Vice Mayor launched the app for iPhone in December 2011. The app is available at http://itunes.apple.com/nl/app/slim-utrecht-in/id462161536?mt=8&ls=1.

Because the brand awareness was at a sufficiently high level, it was decided that no budget would be made available for special promotional actions during events in 2012. Visitors to these events will be informed at the P+R website and by the P+R app.

The evaluation application and keys-results can be summarized as follows:
To measure the awareness of the P+R facilities two on-line surveys were used among social-leisure visitors and commuters. The percentage of commuters that had not heard about P+R Utrecht decreased by 2% - from 38% to 36%. The percentage of the social leisure travellers that had heard about P+R stayed the same (40%). Due to the fact that the awareness among the commuters has an accuracy margin of +/- 5% in both the before and the after measurement, we cannot conclude that the awareness changed.
The respondents also reported whether they had seen the P+R logo. For both the target groups the percentages decreased: commuters from 44% to 43% and social leisure visitors from 45% to 43%. Due to the accuracy margins, it can't be concluded whether awareness actually increased.
In the same surveys the respondents graded the P+R facilities. In the first survey the average grades were 7.3 (commuters) and 7.2 (social leisure travellers). In November 2011 these increased to 7.4 (both commuters and social leisure travellers). To measure whether the number of P+R users increased, records regarding the number of P+R tickets sold at three of the four P+R facilities were kept. At the largest P+R the parking ticket machines were renewed and due to this a reliable comparison of P+R tickets sold before and after the renewal could not be made. The number of combitickets sold at the P+R facilities Papendorp, Muziektheater and Veemarkt increased significantly from the start of the campaign in summer 2010. Based on these numbers it can be concluded that the marketing campaign affected the number of P+R tickets sold in a positive way. To measure whether the number of cars decreased the number of cars that drive on the main roads towards the city centre were counted.

From the process evaluation, barriers were identified. An unplanned tender for the implementation of the campaign which delayed the process and financial cuts in 2012 was the main barrier to this measure. Nevertheless, several drivers contributed to the success of the measure. The economical crisis, the extension of the paid parking area in Utrecht and the closure of 1,000 parking places near the city centre made the P+R facilities more attractive. The baseline survey helped to better target the promotional activities. Furthermore big events offered good opportunities to promote P+R.

For the replication of this measure, it is recommended to make sure that there is a thorough analysis of the city, the transport- and parking possibilities and the groups of possible P+R users. It is recommended to use specialised contractors for the various parts of the measure. Enough time should be planned for the selection process. While applying marketing actions, the targets groups should be clearly and well identified. Indeed, P+R facilities are one part of the several components of an integrated mobility strategy. It is therefore indispensible to develop a context-oriented action plan for the implementation of the P+R – defining the appropriate locations, the target groups and features of the services in interaction with the others components of the overall transportation system adopted by the city. Beyond the framework of MIMOSA, the city of Utrecht recognized the relevance of P+R services and decided to implement two additional P+R facilities by 2016.