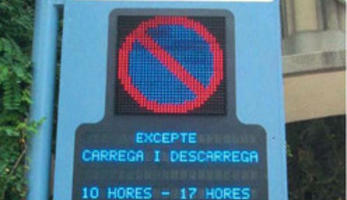 The majority of business premises in Barcelona have only limited stock-holding capacity and no off-street loading facilities. As goods traffic continues to grow, the municipality has been actively investigating solutions for managing on-street deliveries in such a way as to minimise congestion.

CIVITAS surveys and GIS-based data analyses were carried out in collaboration with more than 10 leading operators and the Association of Manufacturers and Distributors of Spain (AECOC). These revealed that while the overall number of delivery places matches the goods demand, the time and location of space availability does not meet operators’ individual and specific needs.

Barcelona municipality’s Mobility Pact (1998) includes the goal of achieving “the efficient, orderly distribution of goods and products throughout the city”. In order to fulfil this goal, the CIVITAS measure was aimed at:

With the active participation of the municipality and enforcement agencies, trials were carried out of various solutions involving flexibility in the times and locations at which delivery is given priority.

The multi-use lane system extends the total length of lanes in the city to 3.3 kilometres and converts the equivalent of 44 on-street parking spaces into unloading spaces between peak hours. At peak times, the lane is used as a priority bus lane with a frequency of 25 buses per hour.

In Valencia Street, the operator Mercadona demonstrated that quiet, night-time deliveries could be made using adapted trucks and unloading methods. From the municipality’s point of view, greater efficiency was achieved by replacing seven day-time deliveries at times of congestion with two deliveries by larger, quieter vehicles outside peak hours.

The web-based “Loading/Unloading (L/U) Active Guide” provides information on the location and occupancy level of the L/U zones in the pilot area and includes a system for receiving and storing registrations from participating operators. Almost 1,800 records were generated during the 16-week trial and these were analysed in order to identify the main delivery hotspots (locations/times of day) that were then subjected to targeted enforcement.

In parallel with the Active Guide, and within the same pilot area, a new measure was developed for testing. The PICT (Spanish acronym for Individual Space for Temporary Loading/Unloading) is an innovative tool for use in locations that lack conventional L/U zones. It comprises a reserved roadside space for goods delivery in front of a business premises and for a limited period of time (two hours). The space is signposted and access is limited to the holder of the concession.

Different types of road were tested using customised PICT regulations in order to facilitate deliveries to three different outlets. The tests achieved better results than expected: favourable reports were received from the police and delivery times were reduced.

The L/U Active Guide confirmed the usefulness of an on-line communication channel between operators and the municipality. It provided a focus for participants’ active collaboration throughout the 15-month project. During the four-month trial period it was used to prioritise enforcement, and as a result 20 percent reduction in problems was reported.

The municipality observed improved circulation speeds following the launch of the multi-use lane scheme. The measure is being extended along other primary roads.

With an investment return of three years, Mercadona’s night-time delivery scheme is now a proven approach for more flexible delivery to larger outlets. The municipality of Barcelona is looking to extend the initiative to a wider number of locations and operators.