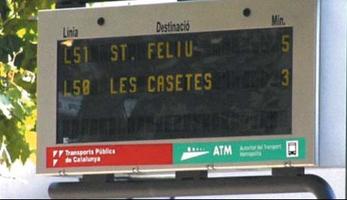 The metropolitan transport authority, ATM, worked with more than 30 private bus companies (operating in the municipalities of the Barcelona region) to develop and install a multi-operator automatic vehicle monitoring (AVM) system.

In recent years, the biggest growth in traffic in Barcelona has been related to movements between the city centre and the wider metropolitan area. The CIVITAS MIRACLES measures promoting collective passenger transport are therefore being implemented within the Diagonal-Baix Llobregat corridor, covering the city of Barcelona as well as five adjoining municipalities, with a view to making public transport more attractive, reducing reliance on private travel modes, and maximising tram-bus intermodality.

The aim of this particular measure was to improve the quality of passenger information. Information panels with real-time messaging were installed at four bus stops, and information about the schedules of private bus companies was integrated with the existing AVM system of the city’s main bus operator, Transports Metropolitans de Barcelona (TMB).

A modern tramway has been installed in the corridor (see CIVITAS MIRACLES-Barcelona-Tramway Integration measure), covering a total length of 15 km, with a total of 26 stops serving a catchment area of some 350,000 people. Bus stops along the tram route have been assessed to determine which ones are appropriate for displaying integrated messages about bus arrival times.

In parallel, the AVM system has been progressively installed on the buses of fleet operators, and the servers of each operator have been connected to ATM’s central control centre.

An important milestone was the agreement reached between ATM and TMB on how to interconnect and exchange information about bus schedules. The interconnection is made by querying the TMB server using general packet radio service (GPRS) and sending the integrated messages from the ATM control centre. The agreement also covers the format/protocol for message display.

Since 2005, bus arrival times have been displayed at four bus stops:

Agreements have been made between ATM, the display panel owner and the local authorities with regard to the location of the panels, installation work, electricity supply and maintenance.

Changes in bus passenger usage of stops that display real-time information was examined using ticket validation data, and the results were compared with data collected at the same stops before the operation of the scheme and at stops without panels.

This fact sheet has been updated by a third party on the basis of available information (not by the city itself). We are therefore unable to guarantee that the data provided are complete and up to date. 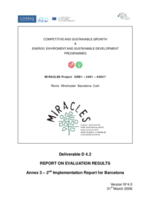