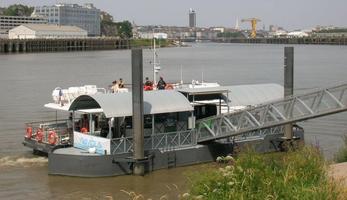 By viewing its waterways as a strength rather than an obstacle, Nantes was able to develop new transportation options to ease road congestion and improve connections.

The Nantes conurbation is crossed by several rivers, making transport connections in some areas problematic. For example, while tram route 2 provided an efficient link between the Tertre campus and the city centre, the link between the two banks of the river Erdre in the campus area was not good. The traditional fishing village of Trentemoult on the left bank of the Loire was not well connected with Nantes or with the public transport network in the nearest suburban town of Reze. Nor were there any direct links between the two banks for pedestrians and cyclists, who were obliged to use two bridges and cross Nantes Island.

It was therefore decided in the Urban Mobility Plan to open up these two isolated areas and to use the waterways for public transportation. The navibus on the river Erdre would provide a direct connection between the railway station and the university campus, while the navibus on the Loire was designed to link Trentemoult and the city centre and tram line 1 on the right bank.

The decision to create two new waterborne public transport services was made in June 2003. In 2004/5, the public transport operator built the waterbus stops along the river and procured new boats for the service, which was given the name “navibus”.

The Erdre route stopped being used for public transport services in summer 2009 (i.e. it stopped being accessible by public transport ticket). With only one boat, a low frequency (one trip every 80 minutes) and a route following that of the tram, the Erdre navibus did not attract a sufficient number of passengers and was mostly used by tourists (a total of 70,500 users in 2008). Based on these conclusions, the route was handed over to a tourist boat operator.

With 365,000 users in 2008, the Loire navibus can be considered a success. The service was maintained and reinforced with the purchase of a new boat in 2009, raising the frequency to 10-minute intervals in peak hours.