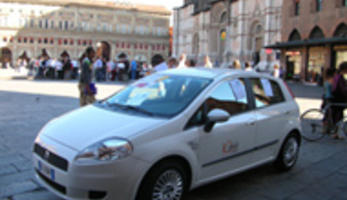 In order to reduce the number of private cars in the city, Bologna wants to set up an attractive car sharing service.

Similar to many other Italian cities, Bologna is struggling with traffic congestion, a lack of parking spaces and air pollution caused by a high number of private vehicles. In 2007, there were almost 200,000 private cars in the city and close to 50,000 motorcycles. To reduce traffic, Bologna wants to offer a successful car sharing service.

Bologna aims to provide reserved parking areas for car sharing, so that users of the car sharing service will easily find a parking space and will have no problem finding a vehicle. One of the main problems to be solved is how to prevent car sharing parking spots to be used by unauthorised vehicles to stimulate behaviour change and foster a culture of sustainable mobility. Citizens will need to be made aware of the service, as well.

Bologna has completed a study on how protected car sharing parking areas can be realised and summarised the results in a report on new car-sharing locations. The most suitable and efficient solution identified is to install electronically activated bollards that either operate automatically when a car approaches or can be controlled from a remote centre. The Municipality is testing an automatic device to prevent unauthorised parking at Via Zanolini in cooperation with ATC. Parking spaces are equipped with an electronic device that recognises licence plates through a video camera and subsequently lowers the bollard if the car is authorised to park there. Another system was tested at two locations, Via Paolo Fabbri and Via Saliceto. This system runs on protocols like ZigBee that sends GPRS mobile data packages to a control centre that can then monitor whether a parking space is free, occupied by an authorised vehicle or by an unauthorised one. If necessary, the control centre can then prompt the removal of unauthorised cars.
On 21 and 22 September 2010, ATC invited more than 1,000 users of the car sharing service to two meetings to launch the new information service, and collect feedback and suggestions on the service. About 70 people participated and car-sharing companies presented and discussed improvements to the service.
From April 2010 to October 2012 overall 17 new car sharing locations were realized in Bologna urban area, of which six are located inside and around the historic city centre. New low emission cars were purchased to reduce the environmental impact of the car sharing fleet: all of the new cars are powered by natural gas or LPG.
Moreover, several innovative options have been introduced and tested: the “One way” service allows drivers to take the car from a location and leave it in a different place. This option is being tested at three parking locations. The “Multi-day use” service makes it possible to book a car from one to four consecutive days at a reduced fare. Finally, the “Long time use” service is offered at a discount for bookings of more than four consecutive days.
Bologna’s car sharing web site was updated and restyled in order to make it more friendly and attractive for potential users (http://www.atc.bo.it/carsharing). Local pages are linked to the national car sharing service site. Specific pages on car sharing were created also on Facebook (http://www.facebook.com/Atc.car.sharing.Bologna) and Google+.
On 21 June 2011 a meeting was held to present the innovation introduced in the car sharing service: new locations, new cars, restyle of the car sharing web site, new sanitization and deodorization programme for cars.
To further increase the number of car sharing users, dissemination campaigns have been carried out throughout 2010-2011 and informative leaflets were distributed to citizens during the European Mobility Week in September 2011. ATC and SRM also organised a “Car sharing conference in Bologna – goals & outputs”, attended by about 20 professionals. Regular consultation days were organised involving car sharing customers to create a ripple effect.
On 18 April 2012 ATC organized a National Workshop on innovation on parking management and sustainable mobility dealing with LTZ management systems, parking payment through mobile phones and car sharing services.

Between August and October 2012 a online survey among car sharing users have been conducted in order to ask them feedbacks on the innovations introduced within the project (new cars, new locations, new devices, new booking and fare options). 188 users answered.
They appreciated the new car sharing locations (80,8% of the sample, according to the internet survey) and new cars (60,8%). The general opinion is good, and a big part of customers renew their subscription for several years.

Dissemination activities to promote car sharing have been activated through web sites, within the ICS (Italian Car Sharing circuit) and during the European Mobility Week in Bologna in September 2012. An ATC info desk was located at Bologna’s central square (Piazza Maggiore) where  information material was distributed to present  the 11 new car sharing locations realized in 2012. The improvements performed in the car sharing service offer and the promotional fares for new subscribers were also illustrated to the public. The new cars that will be included in car sharing fleet in the following months were exhibited too: they are low pollutant vehicles, being natural gas powered, euro 6 standard or even hybrid.
From 24th of September to 10th of November 2012, an important activity was carried out.  It consisted in a infodesk present in several shopping malls in Bologna and some Municipality around Bologna (one different mall each week). The malls were selected for the presence of “Coop” supermarkets, because ATC has an agreement with that cooperative society which includes discounted car sharing service yearly abonment for their associates.
On 17th of October 2012, ATC joined the Alma Fest event (welcome and information for University students) with an with an Information desk, to provide information about car sharing service and specific offers for students.
A white book was realized with main guideline concerning car sharing implementation in Bologna (downloadable from:
http://www.civitas-initiative.org/index.php?id=79&sel_menu=22&measure_i…).

Bologna expected to improve the car-sharing offer by: 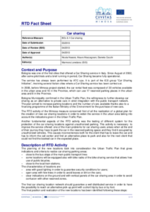 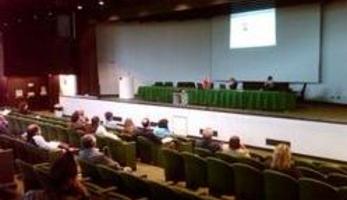 Accessibility, excellent customer service, innovation and customer feedback were the order of the day at the recent Car Share Aware Meeting, organised by the public...