Improving safety at pedestrian crossings and on bicycle tracks 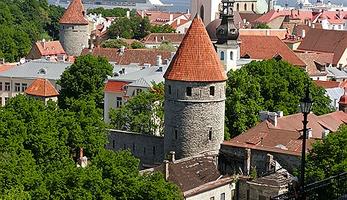 The aim of the measure was to find new approaches for improving traffic safety on crosswalks in Tallinn. This was done by finding 5 new technical solutions on improving visibility and markings for crosswalks.

The aim of the measure was to find new and innovative approaches for improving traffic safety on crosswalks in Tallinn. For that reason an analysis on traffic accident statistics was done and citizens of Tallinn were asked to point out dangerous crosswalks in a survey. Then five new non-traditional solutions (described below) were selected and implemented in certain suitable locations – the solutions 1-4 all in only one location and the solution 5 in 10 crosswalks along one street section. The selection of solutions was based on a series of meetings of traffic experts from Tallinn City and Tallinn University of Technology.

Tallinn expects: • A 15 percent decrease in the number of accidents where bicycle tracks cross roads and at pedestrian crossings; and • A 20 percent increase in satisfaction among light traffic users.

The innovative aspect of this measure was to test new technical solutions to mark crosswalks to make them safer: new types of signs and reflectors, new sensors and programming principles for traffic lights.

The measure was implemented in the following stages:Stage 1: Definition of the most dangerous crosswalks (May 2010 - August 2010) – The dangerous crosswalks were identified based on an analysis of traffic accident statistics and survey results;Stage 2: Selecting the suitable solutions to improve traffic safety on the crosswalks (September 2010 - March 2011) – The solutions were selected by a group of experts during regular meetings;Stage 3: Purchasing of the equipment and signs: (November 2010 - May 2011) – the suitable solutions were acquired and installed;Stage 4: Data collection for the impact evaluation before the change: (May 2011 – June 2011) – the before-study for evaluation was made prior to the solutions being implemented;Stage 5: Installation of the equipment and signs: (June 2011 - July 2011) – The solutions were installed and put into operation;Stage 6: Data collection and impact evaluation after the change: (September 2011 – August 2012) – The after-measurements for evaluation were completed for different solutions and the results were analysed.

The solutions implemented in the scope of the measure were: 1. A spot-lighted crosswalk sign was added above the crosswalk, as the crosswalk signs at street sides were not drawing enough attention in the dark. The system functions together with street lighting, i.e. low light or dark conditions.

3. A speed sensor was added to the traffic lights of the pelican crosswalk (with a push button for pedestrians). The traffic light for car drivers is constantly red and switches to green only if approaching drivers are driving within the speed limit of 50 km/h permitted in the location. The system functions outside peak hours in traffic, i.e. 21:00-07:00 when traffic calming is needed most due to low traffic volumes.

4. A speed sensor was added to the traffic lights of the pelican crosswalk (regulated crosswalk with a push button for pedestrians). The solution is otherwise same as the solution 3 except that the traffic light is constantly green instead of red and sensor switches it to red if an approaching car is exceeding the speed limit of 70 km/h permitted in the location. The system functions outside peak hours in traffic, i.e. 21:00-07:00 when traffic calming is needed most due to low traffic volumes.

Evaluation of the measure was done using city specific indicators of traffic behaviour, pedestrian accident statistics and awareness of the general public on the situation with regard to using crosswalks. The results from the evaluation were as follows:

• The change in acceptance of the current safety situation with crosswalks in Tallinn was unclear. On the one hand it was improved by 3% when considering the positive and moderate responses together which included the reduction of the negative responses, whereas on the other hand, the number of positive only responses was reduced by 10%. There was also no reason to connect the change in acceptance to the implementation of the measure on only 5 crosswalks.

The most important driver encountered during the measure was: the Estonian Road Administration tested a solution at the beginning of 2011 which was originally planned in the scope of the measure. The testing was done on administrations initiative and resulted in the conclusion it was not suitable for usage. This result was clear prior to signing the contract with the installation company so it saved effort and resources on the measure. 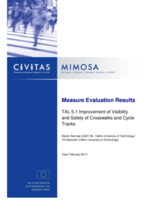 TAL 5.1 Improvement of Visibility and Safety of Crosswalks and Cycle Tracks