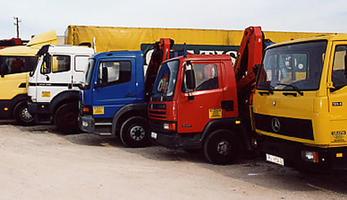 Freight delivery in Zagreb is controlled by different regulatory systems. However, these systems have either been disrespected or not been implemented properly in the past. To counteract this, new freight regulations for the city centre was proposed, including restricted delivering times and specific delivery zones.

Apart from considerable amount of car traffic, Zagreb city centre is also highly “infested” with freight delivery vehicles. This measure tried to tackle this issue. The plan was to introduce new freight regulations to protect the historic city centre and reduce congestion. Furthermore, it was planned that the city traffic department puts adequate signposts and that the new regulations is enforced trough frequent controls by the traffic police. This all should help to improve the quality of public space and improve the situation for pedestrians and cyclists in the city centre.

Based on the collected data, Zagreb Faculty of Transport and Traffic Sciences (ZFOT), as a measure leader, defined a revised proposal. The new proposal is adjusted to the actual traffic conditions in the city centre and stakeholder needs. The objectives of the new proposal (regulations) are to reduce delivery traffic during morning rush hour (after 7 a.m.) and allow certain shippers to make deliveries during an additional time window from 10.30 a.m. to 11.30 a.m. Apart from the new time window, new regulations also determine delivery spots within the two delivery corridors, north and south, with additional time windows. The delivery corridors are placed on the rim of the pedestrian zone and can be accessed through secondary streets with lower traffic loads. This would reduce traffic congestion in the city centre.

After the new proposal was drafted by ZFOT and then accepted by the stakeholders who participated in the public discussions, it was sent to the City of Zagreb Transport and Traffic Department, because implementation of revised traffic regulations falls under their jurisdiction. However, no official response was received by the end of the project and, therefore, no proposed solutions were implemented. After realising that the solution would not be implemented, ZFOT proposed the implementation of the Pilot project. The Pilot project is actually the demonstration of the new proposal. Proposed measures would have been implemented only during a time period of two weeks. The intention was to see how new regulations would work and what could be their impact. This proposal was also sent to the City Transport and Traffic Department, however, it was not acknowledged.

In the fourth year of the ELAN project, after series of bilateral consultations with stakeholders, (un-official) attempts of political lobbying and official requests for implementation which were all rejected, the measure was stopped.

In order to understand the implementation of this measure in Zagreb it is essential to cast the light on few barriers:

Barrier 1 – commitment of key stakeholders – lack of cooperation between different stakeholders caused insufficient consensus on consolidated delivery. Specifically, private store and restaurant owners were reluctant toward the measure and the concept of joined delivery which was later reflected on the level of their participation.

Barrier 2 – stakeholder (user) acceptance – apart from joined delivery, in the pilot project phase it was planned to introduce higher fees for those business subjects who do not comply with new access restrictions.

Barrier 3 – complexity of the problem to be solved – a lot of stakeholders were involved in the implementation of this measure (shopkeepers, delivery companies, restaurants, city authority etc.). Finding the agreeable solutions for everyone, in the end, represented the unreachable objective. Lessons Learned

Based on this experience we are able to outline few lessons learned:

Lesson 1 – Importance of stakeholder cooperation at all levels. The measure failed in its implementation mainly because of the lack of cooperation between different stakeholders (abovementioned barrier 1 and 2). When the main measure objective is to introduce some form of restrictions or when it is necessary to reduce/terminate current privileges, the importance of measure stakeholders is significant. Even if this measure would have been implemented, its usage in the operational phase depends on the stakeholders. Of course, it is always possible to be indifferent to the users of the measure and, in this case, frequently collect money from penalties. However, that approach can hardly be considered as a form of public partnership which is one of the key points of entire ELAN project.

Lesson 2 – Timing for citizens’ engagement. To ensure and cherish this cooperation one of the key tools can be citizens’ engagement. However, the timing has to be right. Specifically, citizens’ engagement activities have to start at the beginning of the project and this was not the case in this measure. Note that the implementation of this measure depended only on support of the several departments within the city municipality. Everything was prepared and agreed upon, but the coordinated scheme was never implemented. However, had the critical mass been reached, it would have probably sped up the necessary decisions.

Lesson 3 – Start small and build up. Even though the measure was stopped, it might be possible to implement the same measure on another location (not immediately in the narrow centre of city). For instance, if the measure would have been implemented in some other part of the city, where there is less demand for delivery, maybe it would be easier to convince decision-makers and other stakeholders that it is a good idea to try to implement similar activities in the centre of the city.