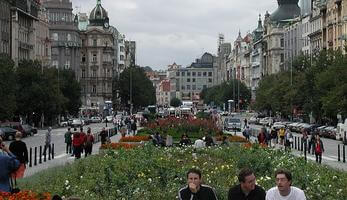 Access by heavy goods vehicles to densely populated areas of the city centre was limited in order to limit negative environmental impacts.

The measure was implemented in response to the increasing volumes of traffic in the centre of Prague, and the resulting high levels of emissions and noise. An effective way of improving quality of life in the city centre is to limit access by heavy goods vehicles, which hinder traffic flow and cause congestion.

In as early as the 1960s, an access restriction zone was created, excluding vehicles of over 3.5 tonnes from approximately 5 km2 in the city centre. This zone was then expanded to exclude vehicles over 5.5 tonnes. In response to changes in haulage fleet composition, in the late 1990s an environmental zone was created, restricting access by vehicles over 6 tonnes to a city-centre area of approximately 17 km2. This resulted in an 85 percent reduction in heavy goods vehicles on some roads.

As a result of continuing increases in urban traffic in Prague, this measure was implemented in order to limit access by heavy goods vehicles to other densely populated neighbourhoods, adjacent to the existing environmental zone.

The creation of environmental zones also puts pressure on haulage companies to gradually renew their fleets with modern, light and medium-weight goods vehicles that run on cleaner fuels, create less noise and are less disruptive to other urban traffic.

Four options for zone extension were analysed in terms of volume and direction of traffic, number of transit trips without a stop, and final destination. Two areas were then selected where the road network and conditions made implementation feasible, and where limiting heavy goods vehicles could be expected to have a significant impact. Traffic signs were then changed or installed to indicate the extension of the environmental zone. Information leaflets were printed and the articles were published in the local newspaper to raise awareness of the extension to the environmental zone.

Restrictions on transit traffic were extended and stricter rules were adopted for part of the zone. The measure achieved:

While the measure was positively accepted by the general public, there was some concern on the part of the authorities regarding the increased administration involved in issuing permits for vehicles needing to enter the restricted-access zone for specific purposes. The haulage operators cooperated in respecting the regulation and in trying to find a solution by opting for smaller vehicles.