Expanding and diversifying the car-sharing scheme 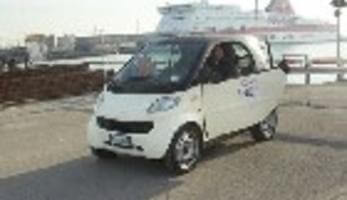 In addition to increasing the number of vehicles in Venice’s car-sharing fleet, the aim was to expand the group of target users through corporate car sharing and by introducing cars suitable for drivers with disabilities.

The two parts of Venice have very different mobility needs: mainland Venice has high road traffic density, while the historic city centre is characterised by waterborne transport for high volumes of tourists and commuters.

The advantages of car-sharing services in mainland Venice are clear, as parking facilities are scarce and expensive. A car-sharing project was launched in 1998 by Azienda Servizi Mobilita. The project was initially limited to eight vehicles, all electrically powered and used in Venice Lido. The vehicles could be collected and left at five strategically located and automated points around the island. The 40 or so users included residents and business people.

Although this first trial was terminated in 2001, it provided the necessary experience for developing the existing car-sharing scheme on the Venetian mainland into a more complex system. At the beginning of MOBILIS, the car-sharing fleet comprised 22 vehicles, five of ran on natural gas. At this time, neither public buses nor taxis were able to transport wheelchairs.

The objectives of this measure were to:

Activities were divided into to main areas: the expansion of the existing car-sharing fleet and the development of the corporate car-sharing scheme.

Purchasing policy was guided by consultation with existing customers for feedback on preferences and performance and by several studies to identify the vehicles most suitable for the installation of the on-board car-sharing computer system, for the use of alternative fuels, and for adaptation to the needs of disabled customers.

Two Fiat Doblos, modified for transported disabled people, were introduced into the fleet in January 2006. Twenty cars, including eight running on compressed natural gas (CNG) were purchased ready equipped with an on-board computer, and two on-board computers for two hybrid vehicles were also purchased. In four years, the car-sharing fleet increased by 135 percent, from 22 vehicles to 56 by the end of the MOBILIS project. Eight new car-sharing pick-up points were added during the project.

Between February 2005 and January 2006, the business concept for the corporate car-sharing scheme was refined on the basis of a demand analysis of local company needs. The existing software and computer technology were also developed to allow company and local authority reservation, customer recognition, movement monitoring and customised accounting. The corporate car-sharing software was tested in May 2006 and the tariff system was designed to make car sharing convenient for business purposes.

The original expectations were surpassed: the scheme had around 4,600 users by June 2008 and 494 firms had signed up for a regular car-sharing service. With the two new vehicles adapted for disabled passengers, the car-sharing scheme was a positive step towards improving transport accessibility.

According to estimated environmental impacts, the measure reduced emissions of carbon dioxide by about 79 tons per year; carbon monoxide by 218 kg per year; nitrogen oxides by 19 kg per year; and hydrocarbon by 18.8 kg per year. Further study would be necessary to explore the influence of the car-sharing scheme on users’ lifestyle and mobility habits and the environmental benefits in terms of lower traffic and parking congestion.

The results of a survey revealed that, among users of the car-sharing service, economic conditions (44.3 percent of respondents) and traffic conditions (41.8 percent) were more important than environmental considerations (27.2 percent). Reduced costs, compared to the expense of a traditional corporate fleet, was the main motivation for companies to participate. 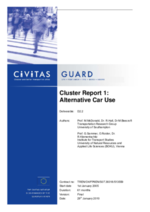