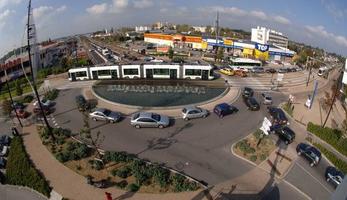 The measure focused on the renewal of one street in Nantes and on the development of public transport services in the north west of the city.

Prior to measure implementation, Vannes Road had a very poor image. The multipurpose four-lane highway served a big regional shopping centre and other services but lacked infrastructure for cyclists and pedestrians and accessible links with surrounding areas.

The project to remodel the road was aimed at improving the quality of the urban spaces along this route, improving public transport services, and encouraging the use of other sustainable transport modes. The new design included the creation of a multimodal station at the intersection between the tram line and the road; better facilities for pedestrians and cyclists; the extension of tram line 3 towards the north west; and improved bus lanes.

The bus-tram-car multimodal interchange was opened in September 2004. It features a covered park and ride facility with 302 parking spaces accessible directly from the Vannes Road, and 10 bicycle parking spaces. The ground level of the car park, comprising 98 spaces, is reserved for customers of the shopping centre, which previously owned the land on which the park and ride was built. This was the first instance in Nantes of this kind of public-private partnership.

Road remodelling began in 2003 with the installation of new drainage and sewerage networks, after which work on the new layout of the road and public spaces began in 2005. The road opened for use in 2006.

The safety and comfort of pedestrians and cyclists improved thanks to the creation of uninterrupted pavements and more numerous and better distributed pedestrian crossings, with traffic-calming features, dedicated cycle lanes, street lighting and better-quality urban spaces.
Surveys indicate a continuous increase in the number of passengers using the extended tram line and the park and ride facility.