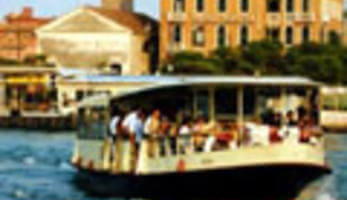 Management of temporary and permanent parking spaces along Venice’s inner canals was improved by the creation of a web-enabled information system.

Since the 1990s, congestion has become a major problem in relation to waterborne traffic in Venice, especially in the city’s inner canals where daily waterborne traffic has to compete for space with local delivery boats and the boats moored along the docks.

A 2001 survey among 50 cargo workers in Venice showed that for most of them boat traffic was a problem in the city and that docks fitted with unloading equipment would greatly speed up deliveries. Lack of space was also a concern, due to the number of boats parked along the docks. The enforcement of the existing parking laws was made difficult by the lack of updated and precise data, by the complicated and lengthy procedure for obtaining permits, and by frequent abuses of the system.

The two main objectives of the measure were therefore to:

It was expected that the planned and controlled management of waterborne parking and the use of docks would have a positive impact on traffic congestion as well as on wave motion and noise pollution in Venice canals.

On the basis of a dock use survey carried out in September 2005, the actual use of the docks was identified and classified according to boat type and time of day. Together with information on the use of parking spaces along the inner canal and on areas experiencing traffic problems, an electronic parking management system was developed in July 2006, based on an online geographical information system (GIS). The system has an end users mode and an administrative mode for permit applications. The end users mode is an interactive tool that allows citizens to visualise and select the temporary or permanent water parking space that suits their needs. The maps are zoomable down to individual canals in the heart of the historic centre of Venice, and a series of tabs and menus enable the user to obtain parking-related data in tables, graphs or maps. Applicants enter all the information required for temporary or permanent parking, and in return the system displays the spaces that correspond to the user’s request and the annual cost of the permit.

Access to the administration mode is reserved for water mobility officers who deal with requests for permits.

The complete operative installation of the system took place outside the timeframe of the MOBILIS project, thus there was not quantitative evaluation during the project of the impacts of the new system on the use of canal parking spaces and the permit application procedure.

However, a positive aspect of the measure was the cooperation between the local authorities, the transport associations, the developer of the geographical information technology, and the city’s water mobility officers.

During the first phase of the measure, a handbook was produced in order to standardise the methodology of data collection, the analysis of dock uses and the re-calibration of permitted dock uses in Venice.