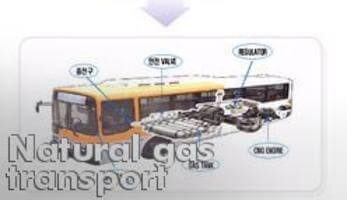 Increasing the number of clean, energy-efficient buses and boats in Venice was seen as a way to reduce emissions of pollutants and protect the city’s unique cultural heritage.

Boats are the primary means of vehicular transportation in Venice, along with high numbers of visiting ships and leisure craft circulating in the lagoon. The Venice Energy Agency therefore decided to promote liquefied petroleum gas (LPG) as a substitute for petrol for private leisure craft.

In parallel, efforts were made to increase the number of public transport buses in Venice running on compressed natural gas (CNG). The bus network of the public transport operator ACTV comprises about 2,212 daily routes and an average annual mileage of 15 million km. In 2004, the ACTV bus fleet transported around 70 million people, with the modal share of public transport reaching nearly 15 percent on week days. At the time of measure implementation, ACTV had 294 buses running in the urban public transport network of Venice (264 on the mainland and 30 on the Lido), nearly all of them diesel powered and most of them meeting lower emissions standards than Euro III.

In 2005, surveys for possible locations of LPG-dedicated fuelling stations were carried out. Three demonstration boats with new bi-fuel LPG outboard engines were purchased and tested. They could not be fully used under standard conditions as they could not be refuelled easily and as existing legislation did not permit running on LPG, except in test conditions. In January 2008, the remaining seven boats were purchased with the aim of demonstrating the reliability of LPG as a nautical fuel.

Between May and July 2005, ACTV converted two Euro 0 buses into bifuel buses (diesel and natural gas) in order to test their functioning and identify potential problems. It was found that the duel fuel system did not have the same emissions advantages as CNG use in Euro IV buses. ACTV therefore decided to concentrate resources on purchasing 35 new CNG buses, which were put into operation in February 2006.

ACTV planned to build a filling station at its depot in order to meet the refuelling needs of the growing CNG fleet. A contract between the city of Venice and ITALGAS for the extension of the natural gas pipeline was signed in January 2006. The filling station was completed in July 2007.

The environmental advantages of LPG for marine use are indisputable. LPG has a substantially lower GHG impact than diesel fuel. However, Italy decided to wait for the issuing of European standards for LPG equipment in boats. The  national and international legal context and the complete absence of specific legislation for either LPG use or for opening a marine filling station, were challenging barriers to measure implementation. However, the measure raised public awareness of the benefits of LPG engines, which may lead to increased demand.

The introduction of the 35 new CNG-powered buses reduced pollutant emissions by 16.3 tons in the case of carbon monoxide; 509 kg of hydrocarbons, 75 tons of nitrogen oxides and 3.5 tons of particulate matter over the 2005 to 2008 period.