Converting the historical centre into a pedestrian zone 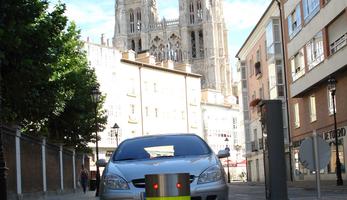 The measure was implemented as part of the renovation of the historic city centre. The establishment of pedestrian zones was intended to protect city monuments, reduce air pollution and create a more relaxed and attractive atmosphere for residents.

Heavy traffic was identified as a key problem in the city centre, greatly detracting from the attractiveness of the area. This was exacerbated by pollution and noise, which impaired quality of life in the historic centre. Narrow streets were damaged by lorries driving close to historic buildings, which suffered as a result of pollution and vibration.

The measure was therefore designed to pedestrianise 4 km2 of the historic city centre and redirect traffic flows. It was decided to consult with stakeholders throughout project implementation. This involved 10 meetings with local traders, five with hotel owners, five with neighbourhood associations affected by the pedestrianisation schemes, and various other meetings with municipal services (police, fire brigade) and services such as taxi firms and ambulances. Agreements were drawn up following the stakeholder meetings concerning loading and unloading hours in accordance with the needs of different types of businesses.

The system was launched with a total of 16 bollards, fewer than the 24 initially foreseen with a view to reducing their visual impact (some were used on both entrance and exit routes), in September 2006. A new traffic control room for the permanent monitoring of the zone was launched at the same time. The launch was marked with children’s activities and concerts to celebrate the reclaiming of the street as a public space free of traffic, pollution and noise and easily accessible by those with limited mobility. These events were widely reported in the national and regional media.

Traffic flow was redirected from the city centre along alternative routes and an information campaign was targeted at drivers of heavy goods vehicles to provide details of the new routes and the changes due to the construction of new ring-roads around the city.

Following stakeholder meetings, numerous pedestrian zones were created between 2006 and 2008 and parties were organised to celebrate the launch of each one. The restricted access system was implemented using electronic bollards activated from the new traffic control centre. This was accompanied by the construction of a ring road around the city and additional link roads. Information on the changes was provided to haulage and transport companies. 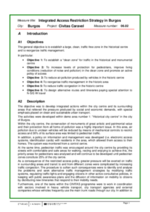 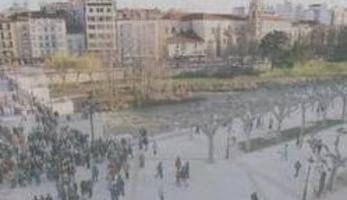 Over recent months, civil works have been completed on the road that leads up to the Arco de Santa María, one of the key monuments of the City of Burgos. The inauguration...