Communication for the introduction of the Bus Rapid Transit (BRT) 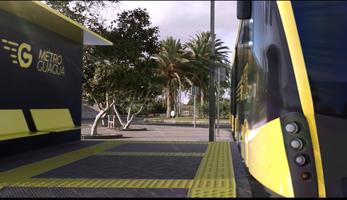 The construction of a Bus Rapid Transit (BRT) might cause some inconvenience to residents and visitors. For this reason, the main focus of this measure is to carry out a communication campaign that will raise awareness of the importance and scope of the project.

It will focus on the BRT's economic and environmental benefits, and role in helping Las Palmas become an eco-friendly city where people are put first.

Several actions have been carried out to promote the BRT among citizens and visitors.

In November 2016, the municipality of Las Palmas de Gran Canaria and Guaguas Municipales presented the new "MetroGuagua brand for the area's high capacity urban public transport system. This was done at a public event in the city's main commercial pedestrian area.

Work started on MetroGuagua (the BRT) in June 2017. Dedicated sessions for target users and meetings with stakeholders have been carried out that explain local mobility plans and the future benefits of MetroGuagua. They include:

Audiovisual and other materials have been produced for these.

In addition, dedicated information sessions are being held for a diverse range of user groups, including older people, journalists, students and neighbourhood associations.

Cooperation with Gran Canaria Film Commission and an audiovisual expert helped preparing tender documentation for the shooting of a MetroGuagua promotional film. The eventual company chosen was OPORTUNIDADES.

The film was presented during EUROPEANMOBILITYWEEK 2019. A premiere was organised at which politicians, mobility stakeholders and citizens were invited to see the film. After that, they enjoyed a conference from Alvaro Neil, also known as Biciclown, a person who has travelled around the world on a bike.

Since MetroGuagua began, several technical explanations have been provided regarding the service. It was therefore decided to try and engage citizens in an 'emotional way' when encouraging them to travel more using sustainablemodes.

That is the main objective of the 12-minute film. Guaguas Municipales is now working to add English subtitles and launch short versions of the film on TV and social media.

Guaguas Municipales and the Municipality of Las Palmas de Gran Canaria are continuously informing the public about the BRT and sustainable mobility. The measure is currently in operational stage.