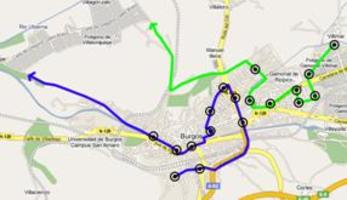 Prior to the measure, industrial zones around Burgos had always been served by multiple bus lines. However, collective transport only represented 20 percent of trips and many employees were still using their own vehicles to travel to work, causing congestion in peak hours. A similar situation existed in relation to educational centres in the city: collective transport was widely used in schools, but routes were developed for each individual school and the irregular occupancy rates did not correspond to vehicle capacity. In response to this unsustainable situation, the municipality designed a new transport management scheme in cooperation with companies from the industrial zone, based on the needs of commuters. Large companies were encouraged to share their own privately operated bus services and timetables, and employees of smaller enterprises were invited to use the new collective service. Operating costs were shared, and therefore reduced.

The ultimate goals of the measure were to:

Activities involved industrial park associations, industrial companies and schools in order to increase passenger numbers and improve service quality. Companies with more than 150 employees operating a minimum of two shifts and collective transport companies in the city were also involved. Public information campaigns were targeted at users and the media along with direct marketing activities to promote the measure.

Initially, it was planned to include both companies and educational centres in the measure. However, school transportation was already organised, so efforts were concentrated on the industrial area.
Some 200 companies were involved and various agreements were signed: 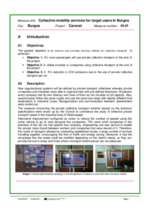