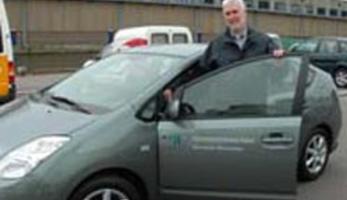 Based on earlier experience with electric vehicles in Rotterdam's municipal fleet, and on best practice examples from Sweden, the city decided to expand the number of clean vehicles in operation.

Under the PREVIEW project, supported by the Dutch Government, 15 electric vehicles were put into operation in Rotterdam’s public fleet in 1999. Although the overall evaluation of these vehicles was positive, a large-scale increase in the number of clean vehicles was not possible due to poor supply on the Dutch market and a general fear of technical shortcomings.

The TELLUS measure aimed to replace 50 vehicles in the municipal fleet with clean alternatives (bio-fuel and hybrid electric vehicles).The type of vehicles introduced was dependent on availability. Rotterdam was hoping to replicate the experience of Sweden, where a large number of bio-ethanol vehicles, fully compatible with standard petrol vehicles, had been introduced satisfactorily.

An important new development is the E-CRT filter system, especially developed for retrofit application on waste collection trucks working with hydraulics. Positive test results led to the ordering of 30 such filter systems in July 2005 to be fitted to existing waste trucks. The city also explored the use of a hybrid hydraulic system for heavy goods vehicles, then being tested in Australia.

Within the TELLUS project, the aim was to procure a total of 50 clean vehicles. Due to the fact that the introduction of the selected vehicles on the Dutch market proved very difficult and took far longer than originally planned, only a small number of vehicles were acquired during the demonstration period. Two retrofitted E-CRT trucks were introduced in February/March 2005.

Following the TELLUS project, and depending on a positive evaluation of the selected vehicles, Rotterdam planned to continue expanding the number of clean vehicles in all regional municipal fleets.