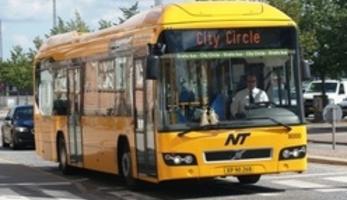 During this project, Aalborg has tested both bio diesel in buses and a fleet of postal delivery vans as well as 10 EVs among families in the city.

Within this measure the opportunities of using a high blend of bio-fuel (>B10) in standard vehicles have been explored. The Public Transport Authority of North Denmark, Nordjyllands Trafikselskab (NT) has set up requirements for the contractors to run a total of 50 buses on at least 10% biodiesel. In addition, 5 HGVs and 45 vans from the postal service in Aalborg are operated on an average of 15% biodiesel. A fuelling station was established to ensure the supply of bio-diesel to the demonstration fleet.

In addition to this, as a part of a broader national trial, the City of Aalborg has organised a test of 10 electric cars (Mitsubishi MEV, Peugeot iOn and Citroen C1EV) by 80 families during a 2 years trial period. The trial started in March 2011 and as the cars are used by the involved families for periods of three months each, the 8 trial periods will be completed in March 2013 (21 months within the Archimedes project). This trial in Aalborg is expected to cover some 200.000 km driving, 30.000 KWH uses of electricity and 6,000 car charging for the 10 vehicles. The use of 10 EV by 80 families in Aalborg is a quite large trial for the scale of the city.

As a third element, Aalborg has launched a shuttle bus line, the City Circle, free of charge, which runs between parking areas, and key places in the city as tourist attractions and the new waterfront.

The broad project has contained of several phases described below:

NT is the Regional Public Transport Authority and has the legal responsibility of the entirepublic transport system in the region of North Denmark. It administers the network of regional bus routes, city bus routes in six cities (Hjørring, Frederikshavn, Brønderslev, Hobro, Thisted and Nykøbing) and Aalborg, and local bus routes within all the 11 municipalities in the region. However, the City of Aalborg has its own section of public transport planning, also involved in the project as part of the Department of Health and Sustainable Development.

The operation of bus services is carried out by private contractors based on tenders let according to EU procedures. The bus operators own the buses and pay the fuel cost etc. and are paid by the hour based on the contract requirement in the tender. To make the buses run on biofuel (which is more expensive) it was necessary to incorporate this as a requirement in the tender, so that contractors could take into account the increased costs in their pricing structure. A major challenge in having the buses run on biodiesel was where to place the responsibility for reliable operation of the bus services. The tendering of the service makes it possible to give the contractors full responsibility for operating the fleets as requested in the tender. This means that the responsibility for extra maintenance or insurances on the buses is also the responsibility of the contractors. The pricing of the risk for running on biodiesel had to be explicit in the bid for the tender, and was reimbursed by the public transport company as part of the demonstration project.

Implementing bio-diesel in the postal fleet:

As a part of a broader national trial, the City of Aalborg has organised a test of 10 electric cars (Mitsubishi MEV, Peugeot iOn and Citroen C1EV) by 80 families during a 2 years trial period.

This trial differs from previous EV trials in the fact that the 80 testing families are ordinary car users, instead of environmental or technical nerds already convinced of the EVs advantages. The test families have been stratified sampled after a call for interested families, covering the aims of the trial.

The trial is made in cooperation with CLEVER, one of the main Danish EV players and the CIVITAS financing is supplementing funding from governmental funds and national sponsors.

The main aim is to identify under which conditions – and to what degree - the EV in its present technical version (OEM EVs), is an attractive alternative to ordinary cars, with the purpose to evaluate the possibilities of substituting the fossil fuel mobility by electro mobility in the future.

Aalborg has launched a shuttle bus line, the City Circle, free of charge, which runs between parking areas, and key places in the city as tourist attractions and the new waterfront. The City Circle was in 2010 operated by a hybrid bus with 30% lower fuel consumption and hence lower CO2 emissions than regular buses. In 2011 a bus operating on 30% 2nd generation bio-diesel was used and in 2012 a bus operating on 100% sustainable diesel was used. The season 2012 has just ended.

There is a slight indication of increased NOx and a tendency to reduced CO, which is in line with most previous studies. At the same time there is a small reduction in PM and Fuel Consumption (BSFC). However, these differences are too small to be significant. The change in HC is also too small to be significant. The conclusion is therefore that emissions are practically unchanged.

The use of bio-diesel will lead to less consumption of conventional diesel, and since the used bio-diesel product is saving the environment from a relatively high amount of CO2, the overall conclusion, is that, local emissions are practically unchanged, while CO2 emissions are reduced corresponding the use of bio-diesel. It is hence demonstrated that 2nd generation bio-diesel, AFME, made from animal fat can be used without major problems in public transport fleets and delivery vehicles.

It is possible to reduce CO2 emissions and fossil fuel consumption from vehicles without increasing other emissions significantly, without moderating vehicles and without encountering major problems in vehicle performances. In total 1,000 tonnes of CO2 has been saved as a result of this measure.

Evaluation has been focusing on the costs analysis, the energy consumption, the effects in air quality and also the EV acceptance by test users
To have an even better data-sample to conclude on, the findings are based on the aggregated data from all cars and charging in the national project, including Aalborg tests results.

The trial has reached to identify under which conditions the EV in its present technical version, is an attractive alternative to ordinary cars and has provided a lot if interesting information towards the future of electro mobility in this region. 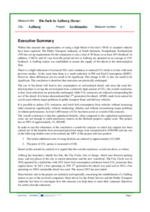 Around half of the city buses in Aalborg started to use 10 percent biodiesel which is CO2 neutral on 1 October 2010. The fuel is second generation biodiesel which...