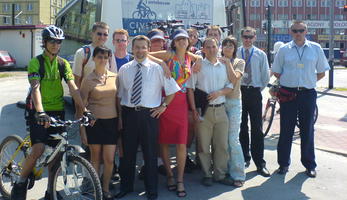 Krakow introduced bike-carrying facilities on selected bus lines to encourage its citizens to cycle more frequently to recreational areas in the city and to help create a bicycle-friendly city.

Prior to measure implementation, cycling in Krakow was neither safe nor comfortable due to the lack of bike lanes. As a result, people were discouraged from using their bicycles to reach recreational areas. The launch of new leisure mobility service in Krakow, comprising the installation of bike-carrying facilities on public transport buses on certain city lines during the summer months, was seen as a way of stimulating the use of bicycles as a means of transportation and of enabling cyclists to make use public transportation when making trips to recreational areas in the city.

Specifically, the objectives were to:

The demonstration phase began with the production of 15 bike mounts for public transport buses. The public transport operator MPK constructed and tested a prototype of a bike mount, then produced all 15 of them using its own labour resources. Bus routes and lines were selected and special bus schedules were prepared. Training was given to 100 bus drivers on how to use the new bike transportation equipment.

The new service was launched in July 2006, accompanied by a communication and marketing campaign. News about the introduction of the leisure-related mobility service in Krakow was disseminated locally and nationally via press, radio, television, Internet and direct meetings with potential users. It attracted great interest from public transport operators in other Polish cities.

The new leisure-related mobility service was widely welcomed by the citizens of Krakow and vehicles equipped with bike-carrying facilities are in operation on selected lines each year in the summer months. 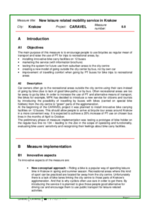