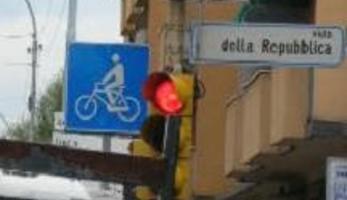 Bologna wants to improve road safety and reduce the number of accidents. The city has therefore implemented an automatic enforcement system at traffic lights that it now wants to evaluate.

Under its Urban Road Safety Plan, Bologna has installed the Star system at 24 pilot sites. The cameras became operational at the start of CIVITAS MIMOSA. When traffic lights are red, the camera takes pictures of vehicles illegally passing the intersection. The pictures are then sent to the municipal police department. Police officers check and validate the photos and fines are then automatically sent to the offender. The images are stored for eventual legal disputes and statistics for evaluation.

The activities under CIVITAS are designed to support the enforcement activity that requires a considerable amount of human resources and data storage. The goal is to improve and fine-tune the hardware and software elements of the system and maintain the tools and instruments. Data will be collected to evaluate the effectiveness of the system. A continuous black spot analysis and accident study will verify the black spot list, a list of the places where accidents are concentrated, and if necessary design system modifications.

In 2008 Bologna installed 15 additional structures for cameras and completed tests on the functioning of the video-controlled systems. By the end of the project (2012), specifications have been drawn up to purchase new camera stations and to shift some of the existing ones from analogue to digital. Enforcement has been continuously supported and data collection is ongoing to verify the black spot list and compile an accident study for evaluation. Maintenance activities have been carried out and will continue throughout the project. These tasks have proven to be very resource-intensive. There have been communication campaigns on the enforcement systems and initial results have been illustrated and disseminated at mobility conferences. A dedicated office to manage the maintenance of all ITS systems in the city has been created. It will allow a better check-up and a better overall organisation. Maintenance activity, which is necessary and also highly resource demanding, has been undertaken on the system and on-street cameras. These maintenance works will be continued throughout the duration of the measure. RTD activities have been concluded with the realization of a study on how  to detect and solve system and device maintenance problems. Activities  to solve these problems and reinforce the system reliability are still ongoing. Enforcement on the road junctions equipped with STARS has been carried out and will continue up to the end of the measure, as well as collection, management and storage of the fines issued through camera control. Dissemination activities have been carried out in the framework of the events implemented within the measure 4.2. Data collection and analysis of accident statistics has been carried out up to the completion of the measure to evaluate its effectiveness. And it will continue in the future.

Designing the measure, Bologna expected that: - The number of accidents, injuries and casualties would have decreased where the Star system was deployed; and - After an initial increase, fine statistics would have stabilised as drivers’ perception and behavior change.

The measure impact evaluation indicates that the Star system is currently the most efficient and most cost-effective technology to deal with traffic lights infringements and that Bologna Municipality’s activities were successful: - accidents reduced by 21% at all crossings equipped with STARS; - injuries reduced by 28% at all crossings equipped with STARS; By introducing this new automatic technology, the number of fines issued for incorrect behaviors at crossings increased significantly by 88% when comparing years 2008 and 2011 but seemed to have stabilized between 2009 and 2011. That testify a behaviour changing by drivers directly caused by the system implementation. Comparing August 2011 data with the baseline, results show that there was a 21% reduction in accidents and a 28% reduction in injuries at traffic lights where STARS was installed. The figure increases comparing data from a year before installation and August 2011, with a total reduction of 40% for accidents and 48% for injuries. These outcomes were obtained in the framework of a small but constant decrease in traffic flows recorded in proximity to traffic lights. A reduction in accidents was also observed over the rest of Bologna’s road network. The STARS system has been installed alternately at the most critical junctions, therefore drivers, who did not  know  where the STARS system was active, changed their driving habits and showed an increased caution at all intersections. The number of fines dramatically increased  after the initial installation, showing that the traditional Police manual controls were insufficient. With reference to fine impact, previous communication activities are very important, since the Local Administrations’ aim is to improve road safety and not to earn money through fines, as it could be interpreted by drivers. Local Administrations must demonstrate that fines are simply a last resort when, despite all the communications/information (e.g. press campaigns, non-compulsory signs before junctions with cameras to inform drivers, variable message boards), incorrect drivers’ behaviors persist. The measure was interrelated with other measures through the common high level objective, to improve road safety, namely “Safer roads to school” (measure 5.2) and Urban traffic safety plan (measure 5.1). The bundled indicator (including accidents, people injured and killed throughout the territory of Bologna in the analysis) showed a significant reduction: 21.1% fewer accidents in 2010 against 2007 (the last year without any Mimosa measures) and 21.6% fewer people injured over the same period. 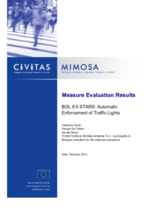 The CIVITAS MIMOSA city of Bologna and CIVITAS VANGUARD organised an advanced telematics (ITS) training that took place on 14 and 15 December 2011. It was hosted...