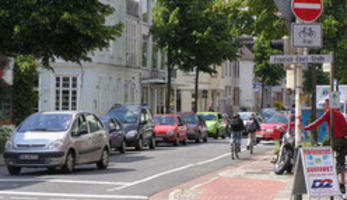 Bremen used various means to privilege sustainable modes of transport such as cycling and walking and public transport, and to discourage less environmentally friendly modes by imposing restrictions on car traffic.

Urban neighbourhoods of Bremen tended to be designed as 30-km zones, often combined with a system of one-way-streets to avoid through-traffic. In order to make cycling more attractive, one-way streets were adapted to allow contraflow cycling, making possible direct, short and attractive connections for cyclists without high the need for high investments. Road safety was ensured by speed restrictions and enhanced visibility for cyclists, partly achieved by the installation of cycle racks. The redesign of some urban streets also led to more space for pedestrians.

In order to create synergy, VIVALDI access management measures were concentrated in an area of Bremen from the inner city to the western periphery.

On one existing through-road, the Hohentorsheerstrasse, the width of the road was reduced, new cycle paths were built, and a roundabout introduced in order to improve the physical safety and convenience of cyclists. The addition of trees and cycle parking facilities further enhanced the quality of the street environment. The Langemarckstrasse, a main shopping street, was completely redesigned. The bus and tram stops were given extended kerbs, allowing safe and easy boarding. A cycle path was added and the number of car lanes was reduced to one in each direction.

An evaluation carried out by the University of Bremen indicated the success of the VIVALDI measures.

The greatest improvements took place in the Langemarckstrasse, where the situation had earlier been assessed by survey respondents as “very unsafe”. The new, less ambitious, cycling regulations on the Lahnstrasse also had a very positive impact. Cyclists viewed the new measure on the Hohentorsheerstrasse, where a separated cycle track was introduce, as less positive in terms of safety. Nearly 30 percent did not feel safe cycling there. More than 10 percent of respondents indicated that they would cycle more frequently due to the new cycle paths.

Although the construction work on Langemarckstrasse had not been completed at the time of the survey, the majority of residents stated that the look of the street was improved and that living there would be more attractive as a result of the measures. Respondents were also able to make statements concerning the pros and cons of the measures: 110 positive and 104 negative statements were given. The appearance of the street and the planting of trees were appreciated the most, followed by measures dedicated to cyclists, pedestrians, public transport users and car drivers. Most criticism related to annoyance at the disturbance caused by the construction work.