CIVITAS II Final Conference - <br>Thank you for your participation! 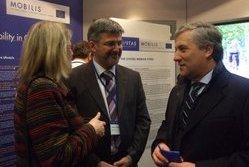 The CIVITAS II Final Conference took place in the French city of Toulouse from 21-23 January 2009. The aim of the conference was mainly to disseminate the achievements and recommendations extracted from the 200 best practice examples developed within the four CIVITAS II demonstration projects: CIVITAS CARAVEL, CIVITAS MOBILIS, CIVITAS SMILE and CIVITAS SUCCESS. Participants from over 20 countries gathered in Toulouse to discuss the findings of the 50M€ European Commission funded CIVITAS II programme. CIVITAS II is the second of three phases of CIVITAS which is benefiting from a total of 180M€ support from the Commission.

Hosted by the city of Toulouse (France), from 21-23 January 2009, the CIVITAS II Final Conference was attended by more than 300 politicians and experts and counted with the participation of the Mayor of Toulouse, Mr. Pierre Cohen, and the Vice-President of the European Commission and Commissioner for Transport, Mr. Antonio Tajani.More than 300 technicians and politicians have been involved since the beginning of the CIVITAS II programme and the Final Conference in Toulouse provided the perfect opportunity to share the achieved results and know-how with participants from all over Europe. Speaking at the CIVITAS II Final Conference, Vice President Tajani cited CIVITAS II as a good example of how the EU could support cities with funding aimed at illustrating innovative technologies and policy measures for promoting clean vehicles, public transport and other more sustainable modes such as walking and cycling. Over 70% of the Europe\'s citizens live in towns and cities. 85% of Europe\'s GDP is generated in cities. Some 40% of Europe\'s CO2 emissions from road transport and 70% of other pollutants are due to urban traffic. Vice President Tajani in charge of transport said: Today Europe is facing serious economic recession - we must turn this into an opportunity. We must invest in innovative new policies and technologies to make our cities work better - that means reducing congestion, promoting public transport as well as healthy modes of transport such as cycling and walking. We will launch a series of concrete actions this year. They follow an integrated approach on sustainable urban mobility. We want to work in partnership with the cities and national governments to achieve this.Vice President Tajani emphasised his strong commitment to the adoption of a comprehensive Action Plan following extensive consultation on the Green Paper Towards a new culture for urban mobility, which the Commission published in 2007. He outlined in more detail the actions that will be launched by the Commission during 2009. These will include actions to assist public authorities with the implementation of a new Directive for promoting clean and energy-efficient vehicles, as well as funding support for pilot projects and studies on various aspects of sustainable urban mobility.On behalf of the four CIVITAS II Projects, their partners and the Special Support-Action for CIVITAS II, CIVITAS GUARD, we would like to express our gratefulness for participating this CIVITAS II Final Conference!PLEASE FIND HERE FURTHER INFORMATION AS WELL AS ALL PRESENTATIONS WHICH WERE HELD DURING THE CIVITAS II FINAL CONFERENCE.